ANM48 is a Japanese idol girl group named after its members' animal ears ; who are various types of Kemomimi (or Kemonomimi) (Beast Ears) species.
Created following the reveal of the existence of "monster species" to the general public, the group, with a roster of 48 members, is the first idol group in the world to be comprised of demihumans. The group has become a national success within Japan.

Unlike typical pop groups (which only perform in concerts or television segments), ANM48 has its own performance theater where its members perform live shows daily. The group's latest single, "Everyday Kemomimi (Everyday Animal Ears)", has broken the group's current record of consecutive #1 musical hits. 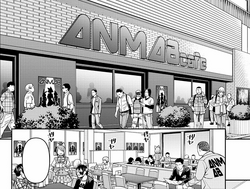 The ANM48 Cafe and Store is a Japanese Pop-themed cafe that offers casual meals and sweet desserts made according to recipes produced by ANM48’s idol singers, which diners can enjoy while ANM48 songs and videos play on large screens set up around the interior space. There’s also an attached shop with exclusive merchandise, and the cafe also hosts special meet-and-greet events with ANM48 members.

The cafe features collectible coasters that feature photos of the ANM48 girls. Patrons can select a coaster to go with their drinks from a stack of face down coasters on the counter. Collecting these coasters is a popular hobby amongst cafe patrons and some come to the cafe with display folders full of coasters and lay any duplicate coasters on their table in the hopes of trading with other customers.

Retrieved from "https://dailylifewithamonstergirl.fandom.com/wiki/ANM48?oldid=63003"
Community content is available under CC-BY-SA unless otherwise noted.