Actia is a Mothman that appears in Monster Musume: Everyday Life with Monster Girls Online.

Actia's shirt has a slogan that reads "Riajuu Bakuhatsu" (リア充爆発, Riajuu Explosion). As a mothman she has moth wings, fur on her lower arms and legs, and moth like antenna.

Actia is a N33T, she uses 2chan slang and wears a t-shirt suspiciously similar to Anzu Futaba's 'You Die If You Work' shirt. 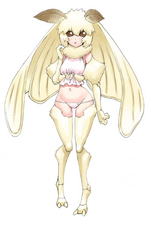 Mothmen (モスマン, Mosuman?) are a psuedohuman race of beings who possess moth-like attributes. Encountered extremely rarely, Mothmen are thought of as agents of destiny and heralds whose presence precede catastrophic events where loss of life is expected, however, they do not actually posses these abilities. Nocturnal, like their animal counterparts, they are easily distracted by bright lights and often camp outside of 24-hour convenience stores due to this.

The first prominent recording of a Mothman encounter by human society was in West Virginia of the United States of America, where Mothmen sightings were recorded from November 1966 to December 1967, proceeding the collapse of the Silver Bridge and the death of 46 people.

Retrieved from "https://dailylifewithamonstergirl.fandom.com/wiki/Actia?oldid=63037"
Community content is available under CC-BY-SA unless otherwise noted.