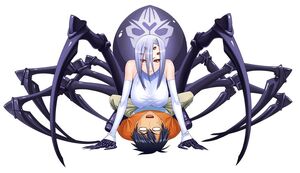 The Arachne (アラクネ族, Arakune-zoku) are a carnivorous, mono-gendered demi-human liminal race that have a human torso but are attached at the hips to the body of a giant spider. They are physically strong and fast.

Arachne are most noted for being able to create a silk that is five times stronger than steel and twice as elastic as nylon. They can also produce variants of the silk, ranging from sticky, to stretchy, to tough, to suit whatever situation is required. While most commonly used to catch and bind prey, arachne can also use their silk to form a network of threads to sense vibrations.

Known for creating "community nests" within dark forests and deep caves and caverns, the Arachne are reputed for being deadly towards humans, famed for using their webs for entrapping men and women and killing them through either eating them whole or biting into their skin and sucking out their bodily juices like a spider. This reputation arose due to the Arachne's natural predatory abilities and form and due to their behaviour of, being a female-only race, luring men to their hidden dwellings and holding them for mating in order to survive as a species; using their webs to restrain the men should they resist. As stories of groups of men being captured by Arachne are rare, it is presumed that on average multiple Arachne would have to mate with a single male, although it is unknown whether they do so in groups (orgies/threesomes/etc like the Lamia) or individually (with the man being shared/passed from one Arachne to another each night)(Rachnera Arachnera's open bisexual tendencies during sexual play may allude to the former being true). Additionally it is unknown whether the Arachne that captured the male has first rights to mating with/owning them or if men are caught to be shared by the nest (like fishermen catching fish for the village to eat).

Since the Cultural Exchange Between Species Bill, government agencies have put a stop to the Arachne practice of luring and kidnapping men against their will (due to being a federal offense). While this fortunately put an end to the mass abductions (and borderline sexual assault) of human men, the results were not so positive for the Arachne, who need men to maintain their numbers and produce the next generation. Presumably, the Arachne birth rate has declined dramatically due to this. In an attempt to evolve their culture to become "more open", Arachne nests have taken to sending "expeditionary forces" via the exchange program for the purpose of ascertaining whether or not Arachne and Humans can coexist despite the Arachne's intimidating appearance and Humanity's tendency to vilify anything different from themselves.

The arachne's traditional craft is knitting, which they have honed after repurposing their abilities from typical "web spinning". 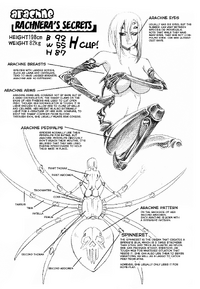 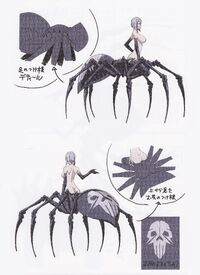 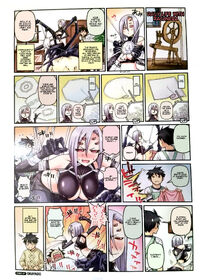 The Small Breeds (小型種, Kogata-shu) subspecies is smaller in size than the standard Arachne. Their legs are short, but they can move much faster than standard arachne, and they are good at jumping and full of energy.

Instead of spinning webs, these Arachne wander around on the ground in search of prey. They can produce thread, but they only use it to stop their descent when they fall from high places.

The Long Leg Breeds (アシダカ種, Ashidaka-shu) are a large subspecies with thinner and longer legs than standard Arachne. These large Arachne are mild-mannered. They cannot produce thread, but they move surprisingly quickly to secure their prey. Their hunting instincts are so powerful that they will sometimes abandon the prey they have captured to pursue new prey.

As they are especially uncompromising regarding the extermination of household pests, they are respectfully known among those troubled by such pests as “sergeants”. 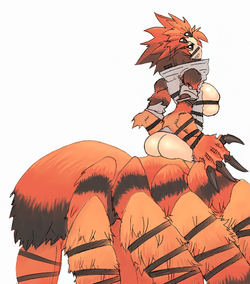 The Large Breeds (大型種, Ōgata-shu) subspecies is far larger than standard Arachne with thick legs and a covering of hair. They are very wild and aggressive. In addition to being strong, they also have venom, making them extremely dangerous to approach without caution. That being said however, said venom is not particularly strong nor harmful.

They are not well-suited to interspecies exchange programs, as when they have interacted with humans, they were arrested for assaulting them and causing other problems.

Retrieved from "https://dailylifewithamonstergirl.fandom.com/wiki/Arachne?oldid=61709"
Community content is available under CC-BY-SA unless otherwise noted.