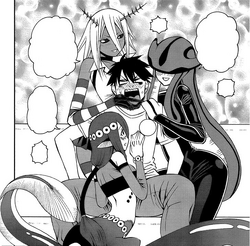 The Blood Suckers is a fan-term used to refer to the trio of Leechi, Yatsume, Moskii, along with Curie, whose shared racial trait between them is that they feed on blood to survive.

The trio consists of a Mosquito-girl, a Lamprey Mermaid-girl and a Leech-girl, all of whom debuted in Chapter 49 of the manga.
Following the Extra Species Cultural Exchange Exhibition it is shown that the three girls, plus Curie, live together in their own apartment.

Retrieved from "https://dailylifewithamonstergirl.fandom.com/wiki/Blood_Suckers?oldid=61941"
Community content is available under CC-BY-SA unless otherwise noted.