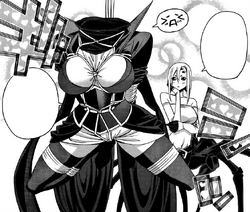 Japanese-style bondage is exemplified through the use of using the rope to form visually intricate patterns while binding an individual and has come to be considered a form of artistic expression; wherein the binder creates "sculptures" by shaping the human body through ropes.

The origin of Shibari comes from Hojo-jutsu; a martial art formed around the restraining of captives. From 1400 to 1700, while the local police and Samurai used Hojo-jutsu as a form of imprisonment and torture, the honour of the Samurai required that they treat their prisoners well. To this end, they developed different techniques within the martial art to tie their prisoners depending on the status of their captured prisoner.

Retrieved from "https://dailylifewithamonstergirl.fandom.com/wiki/Bondage?oldid=57746"
Community content is available under CC-BY-SA unless otherwise noted.