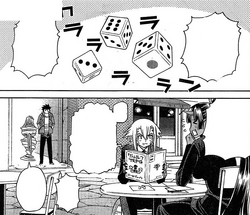 Call of Cthulhu (クトゥルフの呼び声, Kuturufu no Yobi-goe?) (often abbreviated to CoC in English-speaking territories and "Cthulhu Story TRPG" (クトゥルフ神話TRPG, Kuturufu-shinwa Ti-Āru-Pi-Jī?) in Japan) is a horror role-playing game based on the Cthulhu Mythos created by H. P. Lovecraft's story of the same name. The game was first released in 1981.

Rather than the traditional format established by Dungeons & Dragons, which often involved the characters wandering through caves or tunnels and fighting different types of monsters, the game's creator introduced the concept of the "Onion Skin": Interlocking layers of information and nested clues that lead the Player Characters from seemingly minor investigations into a missing person to discovering mind-numbingly awful, global conspiracies to destroy the world.

Unlike its predecessor games, CoC assumed that most investigators would not survive, either alive or sane, and that the only safe way to deal with the vast majority of nasty things described in the rule books was to run away. A well-run CoC campaign should engender a sense of foreboding and inevitable doom in its players. The style and setting of the game, in a relatively modern time period, created an emphasis on real-life settings, character research, and thinking one's way around trouble.

Retrieved from "https://dailylifewithamonstergirl.fandom.com/wiki/Call_of_Cthulhu?oldid=46355"
Community content is available under CC-BY-SA unless otherwise noted.