Cashmere (カシミヤ, Kashimiru) is a Satyr who lives and works on the Black Lily Ranch.

Cashmere is a dark-skinned woman of relatively high height, being the tallest Satyress in the ranch. She has beautiful long platinum hair that reaches her waist and large breasts, whose grows larger when too full of milk. As a Satyr, Cashmere's most notable features are her long goat horns, goat ears and tail, and her neck, arms and legs are covered in platinum fur and has hooves instead of feet

Her attire consists only of an overall with nothing underneath, causing her breasts and nipples to be exposed at certain angles, and a pair of long, woollen, fingerless gloves.

Like all Ranch Satyresses, Cashmere is immodestly outgoing, perverted, seductive, lustful and spontaneous, worshiping everything that involves sex, which makes her ill-regarded by all the other Pans and Minotaurs in the place. In contrast to this, like all the ranch girls, Cashmere is hardworking and does not fail to fulfil its tasks even if she got bored with work, although that doesn't stop her from eroticizing her daily actions whenever she can, ultimately showing that Cashmere only cares to feel horny to the point of not bothering to be manually milked by a member of his own species. She also believes that having too much sexual activity helps a woman to be more beautiful.[1]

Referring to Kimihito Kurusu, since he arrived at the ranch, both Cashmere and the other Satyresses have had immediate sexual interest in him. Like Saane, she had been very explicit in her attempts to excited Kimihito in household chores for the only purpose of having sex with him.[2] Once she was milked by the young man, like the other ranch girls, Cashmere became more excited at each session, but after learning the milking massage,[2] she and other Satyresses openly commented that no longer needed him and as such did not care much about his departure.[3]

When Kimihito Kurusu arrives at the ranch and is being welcomed by Cathyl and Merino, Cashmere is seen with Sappho taking care of a little sheep.[4]

Over the days, once Kimihito began manually milking the Minotaurs and they became increasingly monopolizing the young man,[5] because they were addicted to their "techniques", Cashmere and the other Satyresses planned to harass him sexually. Once they find him having an "intimate moment" from Mil in the bathroom late at night, the Satyresses interrupt them and declare their intention to have an orgy with the youngster.[6][7] When he tries to object, they just approach him and explain that, as the only man there, Kimihito can't expect the Satyresses to stay away from him. Mil then interrupts and tries to tell them to leave, only for the Satyresses to swarm her and start groping her, telling the minotaur that the Minotaurs shouldn't be hogging the youngster for themselves. Taking advantage of the distraction, Kimihito runs away, quickly puts on his clothes, and retreats into his room.[2]

The next day, over breakfast, Cashmere, Saane and Toggen eat seductively in order to sexually tease Kimihito while cooking, however, he ignores them. When they noticing the approach of the Pans in the kitchen and hearing them offering to learn housework from Kimihito, ignoring Merino's protest, the Satyresses also volunteer to help. As Kimihito starts his lessons, the Satyresses try every excuse they can to seduce him, or to get him aroused by either them or one of the unwilling Pan.[2]

Eventually Cashmere and the other Satyresses stop pretending and reveal their intentions of wondering how the milking massage is done. Although Kimihito initially protests about this, once since the Pans "volunteer" to be milked, Cashmere is seen with the other Satyresses getting sexually excited each time she watches the massage being done and, along with Saane, "interview" the pans asking intimate questions while Kimihito massages her breasts.[2]

With time, both Cashmere and the other Satyresses from the ranch together with minotaurs and pans are increasingly addicted to Kimihito's milking massage, causing the youngster to start hiding from them for fear. Posteriorly, when the girls find out that Kimihito was leaving the ranch the next morning, taking advantage of the fact that last day of him at the ranch would be a full moon night, they would hide and devise a lascivious plan to force him to stay permanently on the ranch, Cashmere and the Satyresses spend the day perfecting the milking massage in order to use it to dominate all the ranch girls. Once they succeed, they break into the party the girls have prepared for Kimihito to "milk" him and interrupt them when they are about to violate the young man's body. As the minotaurs and the pans believe that Saane and her group were there to try to take Kimihito from them, Mil, Chizu and Cara set off for offensive, but are easily overthrown by Satyresses' deep milking massage, revealing that how they mastered Kimihito's technique, no longer needed him, and that what really want are the other girls, declaring then that the ranch now belongs to Satyresses.[3]

The next day, when Kimihito is about to leave, Cashmere is then seen being hugged by Karak. After Kimihito's departure, Cashmere and the Satyresses soon realize that without the young man, there is no one left to milk them. Since Cashmere suggests they milking order each other, Saane rejects the idea because she believes it would be "too weird." After Toggen suggests unsuccessfully trying to bring Kimihito back how that would lead to girls wanting to be milked again just by him, Saane then comes up with the idea of creating pamphlets to attract more farmhands by freely advertising that they could milk them, but before they can distribute them, Cathyl discovers the ruse and knocks out all the Satyresses, who eventually give up on the idea.

Subsequently, the exploits of the Satyresses in milking led the ranch to be known by other dairy breeds. It was then that they were approached by Meamill, who wanted to know more about her milking massage techniques while performing the sessions, to the full enjoyment of the Satyresses. Once the centaurine found out about the superiority of Kimihito's milking technique, Meamill left the ranch. However, she left the place in chaos because as both Cashmere and the other Satyresses drank her milk during milking, the milk had returned them to a state of infantile mentality that made her them want to drink milk directly from the Minotaurines' breasts, "forcing" them to take care of the Satyresses until they returned to normal. Fortunately, the effects eventually wear off at nightfall and the ranch returns back to normal.[8] 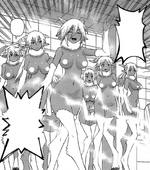 Retrieved from "https://dailylifewithamonstergirl.fandom.com/wiki/Cashmere?oldid=63019"
Community content is available under CC-BY-SA unless otherwise noted.