Catfish (ナマズ, Namazu?) are a diverse group of ray-finned fish that are named for their prominent facial barbels, which resemble a cat's whiskers.

The Walking Catfish (ウォーキングキャットフィッシュ, Wōkingu Kyattofisshu?) is a species of freshwater, airbreathing, catfish that is native to Southeast Asia, but introduced into other waters for commercial reasons.

Considered an invasive species outside of Southeast Asia, the species is named for its ability to "walk" across dry land to find food or new environments to propagate.

This fish normally lives in slow-moving and often stagnant waters in ponds, swamps, streams and rivers, flooded rice paddies or temporary pools which may dry up. When this happens, its "walking" skill allows the fish to move to other sources of water. 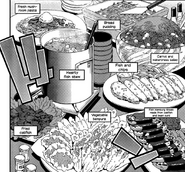 Retrieved from "https://dailylifewithamonstergirl.fandom.com/wiki/Catfish?oldid=18109"
Community content is available under CC-BY-SA unless otherwise noted.