The Centaur (ケンタウロス族, Kentaurosu-zoku) are a demi-human liminal race with the upper body of a human attached to the body of a horse and equine ears. Herbivores, centaurs are normally found in grasslands and savannas, and are a race of nomads who become brave warriors in times of conflict.

Their civilization is ancient, by far the oldest of all the humanoid races known to mankind. Extremely proud and strong-willed, they differ from the other races in that they can characteristically consciously suppress their urges during mating season.

For centuries, Centaurs were a violent, militaristic race that lived around the art of combat. While Centaur males developed into being muscular, vulgar, violent beasts who only saw raw strength as valuable, Centaur females favoured technique and became refined, though prideful, warriors.

A polygamous marital culture, in order to continue their warrior culture, Centaurs mated with only the strongest of their race to ensure strength in the next generation, however, as the Centaur males became more crass; with minds only for building their strength, Centaur women began disliking the notion of "relations" with their male counterparts and turned to looking for more visually palatable men, such as humans, and this change in taste began to cause the centaur birth rate to dwindle. In order to overcome this problem, at least one generation ago centaurs started using 'Teaser Males' to aid in reproduction; where, during intercourse, the female would be sexually teased, or enticed, by a male that she desires as a mate, then the male Centaur mounts her when she is sufficiently aroused.

These 'Teasers' are chosen from a stock of cultural exchange student applications. While perusing the applicants, the Centaur women would give preference to the applications of the men they find visually pleasing. From there, upon the exchange student's arrival, the women would engage them in a courtship that would ideally lead to them becoming their 'Teaser'. The Centaur men do not seem to notice or care that their harem wives are taking on these 'Teasers/Lovers'.

However, not all Centaur women wish to engage in this form of relationship either and instead simply claim disinterest in reproduction; embarking instead in search of a "noble lord" to "serve" as their ancestors once did long ago. However, even these women may become forced to at least join a harem so that their familial line may continue.

Apparently, modern centaurs have stuck with breeding with their own kind in the traditional belief that doing so will keep their race strong, in opposed to mating with other species (humans in particular). For them, a position in opposite to this would require hard evidence to prove otherwise. Centorea's mother in particular set out to prove this by duelling her own daughter, because Centorea is actually half human. By duelling her mother, an undefeated champion jouster of the strongest lineage to a standstill, Centorea unknowingly proved that not being full centaur would not dilute the races' strength as a whole. 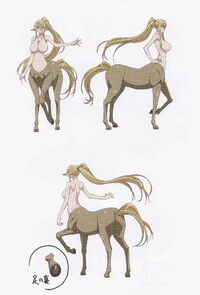 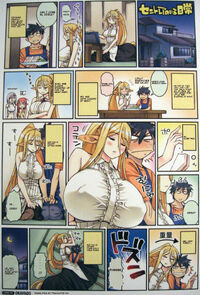 Lightweight Centaurs (軽量種, Keiryō-shu?), known also as Racing Centaurs, are a Centaur subspecies that excels at running. They are smaller than standard centaurs, with slimmer and tighter bodies. Though they approach their rank and records with a stoic attitude and love running, they are easily injured, and they devote much of their attention to studying health care. They can be rather moody, but this can be attributed to timidity or physical and mental innocence. Since their bodies are not as large, neither are their breasts.

In times in the past, lightweight centaurs likely served as scouts and messengers, but would likely simply perform delicate work like tailoring or peddling in modern times. Given their necessary attention to health care, lightweights probably also serve as doctors and therapists for the community, as well. These centaurs have only standard breasts, and would make heavier use of dairy breed centaurs as wet nurses than the other species do. As running is in their blood, they usually wear track and field clothes designed for centaurs.

Dairy Breed Centaurs (馬乳種, Banyū-shu?, lit. "Horse Milk Species") are a Centaur subspecies that produces an exceptional amount of milk. Among the already well-endowed female centaurs, Dairy Centaurs have particularly large breasts. Because of this, they often serve as wet nurses for other centaurs who have trouble producing milk (like Lightweights), and due to this, it is common for Dairy Centaurs to live among groups of other centaur subspecies. Though they are about the same size as standard centaurs, their waists and legs are especially thick. Dairy centaurs are easygoing and meek. Their maternal instincts are strong, and they love small things.

While they have traditionally served as wet nurses since the age of antiquity, that practice has declined since the advent of formula. Additionally, the milk of some Dairy Breed Centaurs (and centaurs in general) seem to have the affect of temporarily sending the consumer into a infantile state regardless of age. Their usual clothes are extremely low-cut dresses which only cover their nipples that aid them in being milked.

Heavyweight Centaurs (重量種, Jūryō-shu?) are the most muscular of the Centaur subspecies. They are so powerful that they can move around unimpeded even while wearing heavy armor. However, since they rarely have opportunities to wear armor in modern times, they apply their strength to farming and agriculture. They are the largest and most muscular of the centaurs, and their legs are far thicker than those of other centaur subspecies. However, most are gentle, good-natured, yet absent-minded and they are often dim-witted.

Unicorns (ユニコーン, Yunikōn?) are a demihuman subspecies of Centaur that have had myths and legends written about them since before Greecian antiquity. Known as a symbol of virgin purity, Unicorns are said to be "only tamable by virgin women". It is said that their horns are able to cure all diseases, with the resulting rumor resulting in a mass hunting for the species. Hunters usually used the species' fondness for virgin women to lay traps to capture them and harvest their horn.

Nicole Unicole and Keros are Unicorns.

Nightmares are a demihuman subspecies of Centaur that can enter the dreams of sleeping individuals and create nightmares, however if the individual is awake they have to use hypnotism to put them to sleep.

Rem Nighdrem is a Nightmare.

The Pegasus ("Pegasi" plural) are a demihuman subspecies of Centaur that can fly using the powerful wings attached to their equine bodies. Famously appearing in Greek mythology in the stories of several heroes, the Pegasi serve only those who are truly noble and morally strong. Their clothes are custom-made for maximun movement of their wings.

Pegasania Bellerophon is a Pegasus.