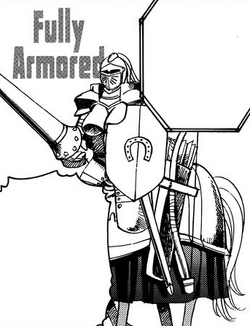 As a warrior inherent, Centorea Shianus possesses an armoury of weapons at her disposal. Due to her upbringing as a knight, the majority of her weapons are of European origin or design.
While realistic in appearance, due to the laws in Japan forbidding an individual from carrying harmful weaponary, the majority if not all of her bladed weapons are actually fake or replica models.

In Chapter 4 Centorea is seen wielding this sword while looking for a Master to dedicate herself to and brandishes it while in pursuit of a thief. While able to use the weapon to cleave her way through several obstacles the thief throws at her, the thief manages to acquire it and attempts to kill her with it only to be blocked by Kimihito, who takes the attack onto himself. Fortunately, due to the sword being a replica, Kimihito survived the experience.
She later uses this claymore again in Chapter 14 to apprehend Kasegi and his "film crew" and equips it yet again with her armour to protect Kimihito in Chapter 21.

In Chapter 8 Centorea wields this claymore against Suu when the Slimegirl suddenly appears at the Kurusu House. Believing that the slime would be extremely easy to defeat (due to her knowledge of such liminals in videogames) the sword actually has next to no affect due to Suu's ability to stretch and bend around the blade. 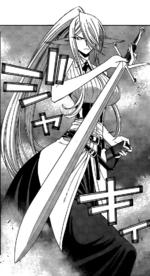 In Chapter 16, Centorea wields a replica of Andúril, from The Lord of the Rings, to save Kimihito from Rachnera Arachnera's advances. However, while it was still in her possession, she is unable to later use it to defend herself from an attempted rape by the male of the The Racist Couple due to the Cultural Exchange Between Species Bill forbidding liminal species from harming humans. 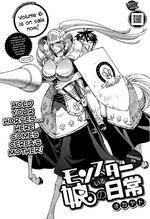 In Chapter 29, Centorea is seen wielding this claymore on the day her mother visits and draws it against her when her mother insults Kimihito's appearance.

In Chapter 29, Centorea brandishes a medieval European jousting lance and shield whilst jousting with her mother, who is also brandishing a jousting lance and shield. A jousting lance was a variation of the original war lance as the lance tips would usually be blunt and flattened out like a cup or furniture foot, to provide a wider impact surface designed to unseat the opposing rider without spearing them through. The centre of the shaft of such lances would also be designed to be hollow, in order for it to break on impact, as a further safeguard against impalement.
The same chapter also sees Centorea training with a practise lance before her mother arrives. 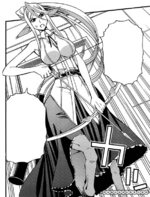 In Chapter 5, Centorea unleashes a volley of arrows to ward Papi away from Kimihito. In its appearance in the anime episode Species 3: Everyday Life Under Dangerous Circumstances, the bow is revealed to be golden in colour. 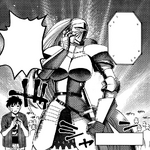 First seen in Chapter 21, Centorea's personal plate armour suit is a full suit of centaurean armour presumably made from iron or steel plate. Heavily based on the design of the European plate mail suits worn by the heavy cavalry of 15th and 16th century Europe, Centorea often keeps her suit on display in her room and attempts to take it with her whenever she feels she is going somewhere where she will enter combat (such as the Lamia Village or as a bodyguard for Kimihito). 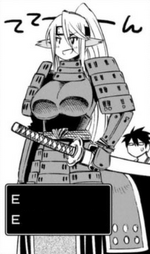 While under the influence of Matango spores in Chapter 45, Centorea finds a full set of mounted calvary Samurai armour, complete with katana sword, at Rachnera's Item Store.
The armour may be based on the armour of Yukimura Sanada from Koei's Samurai Warriors video game franchise as the 6 coin symbol of the Sanada family can be seen draped over her flanks. 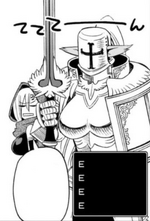 While under the influence of Matango spores in Chapter 45, Centorea finds a full set of celestial armour at Rachnera's Item Store. Often found in numerous RPG games, celestial armour is often amongst the strongest armour sets available for knight/warrior class characters. They are frequently made by celestial or holy entities and are only worn by the most powerful, most noble, swordsmen and knights in the realm.

While under the influence of Matango spores in Chapter 45, Centorea finds herself wearing novelty items instead of what she thought was a full suit of battle armour after Rachnera's Item Store vanishes around her.

Retrieved from "https://dailylifewithamonstergirl.fandom.com/wiki/Centorea%27s_Weapons?oldid=61030"
Community content is available under CC-BY-SA unless otherwise noted.