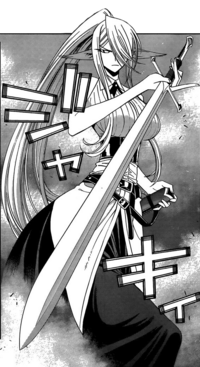 This page deals with Centorea Shianus's interactions with the other characters.

Like all of her fellow home-stays, she is in love with him. Although unlike the other girls, Centorea's affections are in check, and therefore causes Kimihito far less injures than Miia does on a regular basis. But she does have times of being flustered and has fantasies of being Kurusu's wife, and having a baby together. Initially, the only intimate moment she had had with him was holding his hand while they walked home from the Extraspecies gym. Over time, however, she's started accepting her sexual desires more, to the point that she was happy to have him suck poison out of her bare nipple, even after it was revealed that she was in no danger whatsoever; it was heavily implied that she just really wanted to get intimate with him, on a more sexual level.

She considers her to be unfit for her job agreeing with Miia, however, she does seem to show respect to her when she's around.

She dislikes him after he tried to steal a passerby's purse.

After the couple attempted to rape her, she, like Rachnera and Miia, despise the couple.

Centorea initially disliked Kasegi filming her and her room. After Suu blew Kasegi's cover, Centorea along with Miia and Mero became hostile towards him. Centorea was going to use her sword on Kasegi, but Kimihito attacked the con man instead.

Centorea attempted to judge and evaluate whether the family of Ren Kunanzuki would take good care of Rachnera or not. Ren told the centaur the history before insulting her that she "smelled like animal".

Initially, Centorea's rivalry with Miia was heated to the point of fighting each other for Kimihito's affections. Eventually, their rivalry became friendly as they respected and got along well with each other.

The two don't interact much but seem to have respect for each other.

At first she deemed her a threat but would later come to trust her but hates it when Suu molests her.

Centorea was aware of Mero's curiosity of Kimihito's relationship status and later pointed out that Ms. Smith was unusually respectful towards the mermaid. Centorea respected Mero whom she perceived to have come from a royal family and was floored upon the confirmation.

She and Rachnera, while they do respect each other, Centorea resents her, she also doesn't like it when Rachnera ties her up.

She at first didn't like her but later like Rachnera accepted that if Kimihito was gonna die, Lala might as well get it over with. She also knew what her species was and explained to the other girls what she was. She then said she wouldn't mind Lala staying if she wasn't the "Grim Reaper".

Centorea generally doesn't interact much with Doppel, but they respect each other as friends.

Centorea generally doesn't interact much with Tionishia, but they respect each other as friends.

Centorea generally doesn't interact much with Zombina, but they respect each other as friends.

Centorea generally doesn't interact much with Manako, but they respect each other as friends.

While she was hypnotized by her, she seems to be thankful of her for helping her express her feelings for Kimihito.

She is Cerea's mom. Although she didn't like her mother's ideology on marriage, after a joust she later reconciled and was told that her father was actually human, making Centorea half centaur and half human. She also allowed Centorea to marry whoever she wants.

Centorea generally gets along with Merino, but the Centaurine was quite angry when Merino asked Kimihito to shear her.

Centorea generally gets along with Alusia, but is uncomfortably embarrassed by the tremendous admiration that the Lightweight Centaurine has for her.

Centorea's relationship with Nightdrem is not really the best, due to the nightmares caused by the Nightmare girl, which were like a mental torture for Centorea. However, while the event was traumatic for Centorea, she appears to have quickly gotten over it.

At the beginning Centorea didn't think much of Cheron and seemed to regard her as a bite naive. However, she was eventually impressed by Cheron's wise words, especially when she realized that Cheron was a famous member of the Du Pell family. All in all, Centorea has clearly the best relationship with Cheron among the Centaur girls in the Centorea Arc.

Based on the fact that Meamill tried to seduce Kimihito and lied to Centorea, her relationship to the Dairy Breed Centaurine can clearly be considered the worst of the Centaur girls in the Centorea Arc. Especially the unpleasant situation in which Meamill sucked the milk from Centorea's breasts made Centorea reluctant to remember this event even later.

Centorea gets along with Nico and was ready to help her with her spending problem. However, Centorea seems to think Nico is a bit crazy because of her fanatical preference for idols.

Retrieved from "https://dailylifewithamonstergirl.fandom.com/wiki/Centorea_Shianus/Relationship?oldid=63192"
Community content is available under CC-BY-SA unless otherwise noted.