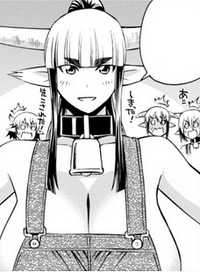 This page deals with Chizu's interactions with the other characters.

Like her senior, Chizu respects Cathyl very much and both seem to get along very well.

Although she is a Pan, because she is also her senior, Chizu respects and appreciates Merino.

As her superior, Chizu respects Mil very much and both seem to get along very well. They have such a great friendship that when Mil was knocked out by the satyresses, Chizu immediately put herself on the offensive in order to avenge her knocked-down friend.

Chizu and Cream get on well with each other.

Chizu and Urt get on well with each other.

As the strongest minotaur girls on the ranch, Chizu and Cara get along well with each other. So much so that both of them united to attack the satyresses after they overturned Mil.

Chizu looks like gets along with all the other minotaur girls.

Chizu looks like gets along with all the other pan girls.

Chizu had no hostility to the satyresses. Later, under the influence of the full moon, Chizu was willing to attack the satyresses simply for believing that they were wanting to monopolize Kimihito just for them.

Retrieved from "https://dailylifewithamonstergirl.fandom.com/wiki/Chizu/Relationship?oldid=57323"
Community content is available under CC-BY-SA unless otherwise noted.