Daily Life With A Monster Girl Wiki
Register
Don't have an account?
Sign In
Advertisement
in: Locations

Originally a small doujin shop located on the third floor of the Kambayashi building in Akihabara in 1993, Comic Toranoana changed the landscape of the district's main street, Chuo avenue, when it began to prominently display giant banners of anime and manga art from the face of its new, multi-story store in 1996. Soon, competing retailers copied their advertisement strategy and the avenue became swathed with banners and posters of anime, manga and videogame characters.

Now possessing multiple stores in multiple cities, the company is one of the leading retailers of otaku goods in the country, specializing in doujin works. 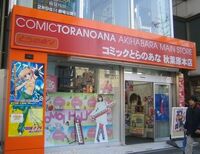 The store featured in Species 7: Everyday Life with MON and an Arachne is based on Comic Toranoana store B, located in Akihabara, Tokyo. Located next door to the main store, this store features an exclusive floor for women-oriented goods (otaku goods aimed at women).