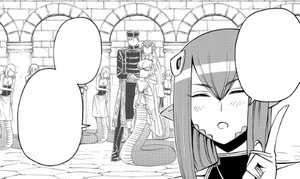 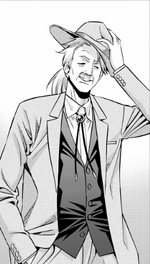 A mature man of sound decorum and manners. While still able to satisfy his Lamia wives, "Mr Sir"'s age has begun to adversely affect his ability to continuously breed without injuring his back. However, his true skill lies not in what is in his pants but in his dexterous hands and fingers which has driven many lamia to the brink of ecstasy and back.

"Mr Boyfriend" of the Echidna Tribe[]

A taciturn, behemoth of a man who specializes in physical strength and durability; traits that the Echidna Tribe consider appealing. However, beyond these surface traits "Mr Boyfriend" is also considered to be extremely dependable by the Echidna community and indulges in the hobby of making cute snake-accessories that his wives adore wearing.

"Mr Boytoy" of the Melusine Tribe[]

"Mr Partner" of the Medusa Tribe[]

An intelligent and financially successful man who has helped the Medusa Tribe formulate a solution to the impending population crisis plaguing the "Snake-girl Tribes". While knowledgeable and analytical on the surface, beneath this exterior lies the heart of a romantic whose poems frequently win the hearts of his Medusa wives.