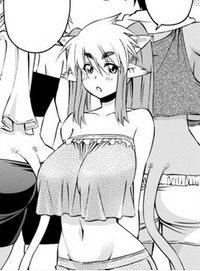 This page deals with Cream's interactions with the other characters.

While initially Cream was just friendly with Kimihito, as with all of the farm's Minotaurs, she quickly takes a liking to him because of his milking skills. However, because of her desire to want to increase the size of her breasts, she became somewhat bossy towards him, demanding that the young man massage her breasts in secret from the other girls. His relationship with Kimihito turned out to be close enough for him to know about Cream's concern about her breast size among the other girls. Such care for Cream eventually caused her to fall unconscious in love with Kimihito, being in turn completely embarrassed to realize this in one of the massage sessions with the young man.

Like her veteran, Cream respects Cathyl very much and both seem to get along very well.

Although she is a Pan, because she is also her veteran, Cream respects and appreciates Merino.

As his superior, Cream respects Mil very much and both seem to get along very well.

Cream and Urt get on well with each other, although she is very shy.

Cream and Cara get on well with each other, although she is very secretive.

Cream and Chizu get on well with each other.

Because satyress's breast size is larger than her own, Cream sees her as her rival.

Cara looks like she gets along with all the other minotaur girls at the ranch.

Cream looks like she gets along with all the other pan girls at the ranch.

Cream looks like gets along with all the other satyress girls.

Retrieved from "https://dailylifewithamonstergirl.fandom.com/wiki/Cream/Relationship?oldid=57650"
Community content is available under CC-BY-SA unless otherwise noted.