Curie Drakulya is a Vampire who crossed the Japanese border illegally, as her kind are considered too dangerous to enter the country.[2][3]

Curie has the appearance of a thin girl with white hair that hangs over her yellow eyes, pointy ears, and she has heavy shadows under her eyes.

As a Vampire, her most noticeable physical traits are her large bat-like wings in lieu of arms, her clawed feet, and slit pupils.

Curie usually posesses a very reserved and quiet demeanor. She doesn't often voice her opinions and stutters easily. She is shown to be very timid, as when confronted with someone who is more outgoing, she was very nervous and had trouble interacting with them. In contrast to her usual mood, she is far more energetic and talkative during the night; speaking about her opinions with great enthusiasm and not stuttering.

As opposed to most of her kind, Curie does not like dark enclosed spaces, is afraid of heights, and has an aversion to blood. However, during nightfall, her personality changes and she becomes extremely dangerous and bloodthirsty. This is due to her father's spirit possessing her and no longer exists after Lala separates his spirit from Curie.

Curie's mother died when she was still young, causing her to be raised by her father, Wladislaus. Due to the fact that the Vampire race was slowly nearing extinction, Wladislaus tried to raise Curie to continue their legacy. However, because Curie's phobias of blood, heights, bats, and coffins, Wladislaus' efforts to make Curie a "true" Vampire were in vain.[1]
Extremely disappointed in his daughter, Wladislaus eventually died. However, instead of moving on, his spirit possessed Curie, and caused her to become extremely bloodthirsty every night when he took control. While Curie was aware of the possession to some degree, she was unable to do anything about it.[4]

Curie arrives in Japan in part as thanks to the actions of Mr President of the Black Lily Advanced Materials Laboratory. As part of their negotiations, she and two others were sent to harass a certain Arachne's host family. She arrives outside of the Kurusu House near nightfall where she becomes possessed by her father and attempts to feed on Zombina.

Unfortunately Zombina's formaldehyde based blood poisons her and instead she's forced to flee, choosing to fly off to the Inter-Species Cultural Exchange Exposition to rest for the day and try to get some of her strength back. There she encounters Papi who was looking for a place to nap and the harpy ends up dragging her all over the Exhibition.

She was later seen at the laboratory, giving the scientists a saliva sample for research on the vampire virus, alongside Kino and Killa. 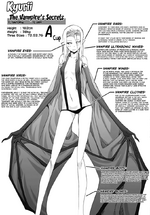 The Vampire (吸血鬼) is a humanoid species that is famed in mythology for their aversion to sunlight and their possession of fangs for sucking the blood of other beings.

Due to their natural diet of blood, Vampires were considered predatory and associated as Devils until around the early 18th-century in southeastern Europe when they were first identified as their own species by human culture. As humans seemed to be their primary prey, Vampires were considered to be evil beings amongst the human populace and were greatly feared for their ability to lure their prey into being fed upon and their ability to turn "normal beings" into vampires thanks to a "Vampire Virus" that is transmitted via their bite in a similar manner to Zombies.
Although some facts are true to a degree, the traits of the vampire species has been exaggerated over time due to fear-fuelled myths and folklore. Actively hunted into modern time by their once-prey, Vampires now exist in near extinction.

Retrieved from "https://dailylifewithamonstergirl.fandom.com/wiki/Curie_Drakulya?oldid=61634"
Community content is available under CC-BY-SA unless otherwise noted.