It is difficult to get a general picture of Devils, as both the appearance and the behavior of a Devil depend on which subspecies it belong to. Devils are one of the few species that have magic, but the exact type of this magic or its strength also seems to depend on the respective Devil subspecies or even to be individually different. For example, Lilith seems to only have hypnosis, while Sitri can turn everything into chocolate, even though both are Lesser Devils. Lesser Devils and Greater Devils usually use their magic to play malicious pranks on others or to sow discord but this often brings them into conflict with the Cultural Exchange Between Species Bill. This is in contrast to the Elder Devils, who are generally calm and relaxed and don´t play pranks on others.

Succubi are a unusually female Devil subspecies (male representatives are called Incubi) , because they are characterized by the peculiarity that they individually look like Lesser Devils, Greater Devils and Elder Devils, even though they belong to the same species. While it is not known if they can use magic as well, they are said dream demons in the literal sense, like Nightmares (Chapter 69). They are best known for their high libido and ability to seduce men (or woman at Incubis). However, Succubi remain extremely loyal to their chosen partners and generally seem to be of a quiter, more sensible manner. 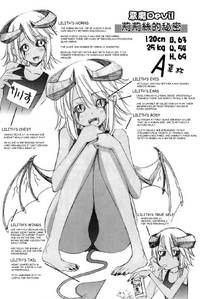 Lesser Devils (レッサーデビル, Ressā Debiru?) are devils that have the bodies of humans in their childhood. Lesser Devils have small wings and bodies that are comparable with children, even though Lesser Devils can be fully grown in actuality. Lesser Devils usually use their petite bodies to get away with affording things at children admissions rates.

Greater Devils (グレーターデビル, Gurētā Debiru?) are devils that have the bodies of humans in their late teens. Despite the name, Greater Devils are not matured Lesser Devils, but rather their own Devil class. They enjoy dressing in human fashion and venturing into the city at night to play rather malicious pranks.

However, because their actual age is much greater than their apparent age, much like Lesser Devils, they can be out of touch with fashion trends popular among younger people.

Elder Devils (エルダーデビル, Erudā Debiru?) are devils that have the bodies of humans in their adulthood. Appearing even older than Greater Devils, they are the voluptuous/highest class of Devil, and boasts the largest average wingspan.

Succubi are a devil subspecies that can be similar in appearance to Lesser, Greater or Elder Devils but lack devil horns, posses a Womb Tattoo-like marking on their lower stomach, and possess a prominent interest in sex and all things sexual.

Religious traditions in human culture hold that Succubi live by sustaining themselves on “life energy" stolen through sexual intercourse and that repeated sexual activity with a Succubus may result in the deterioration of health or mental state, or even death. While whether this is true or not is unknown, Succubi culture is entirely rooted around the act of sexual intercourse; with the desire for sex, fornication and pleasure forming the basis of their cultural thinking and moral values, and as a result they are an extremely lustful and openly lascivious race. Not only are they physically beautiful, everything from their gestures to their voices will charm an individual and inflame lust. Their techniques for seducing and pleasing men and women alike are highly valued and are in some ways more effective than raw fighting abilities.

While it is true that Succubi have extraordiarily high libido, it is later revealed in Chapter 66 that they remain extremely loyal to their chosen partner. There is also a male variant of this subspecies, the Incubi, which are mentioned in Chapter 69. 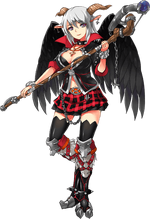 Baphomets are a demihuman species with goat-like attributes in similar vein to Satyrs and Pan Fauns but with the addition of raven wings.
Closely linked with occultism or outright Satanism throughout history, since the 1800's the species has been associated as members of the Hierarchy of Hell and as such their image has been imprinted as the official symbol of the Church of Satan. Baphomets are always crossed with pentagrams. 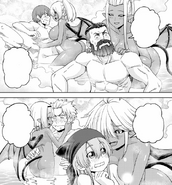 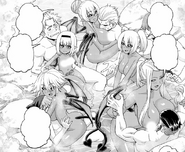 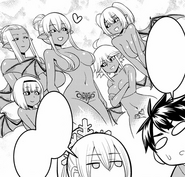 Retrieved from "https://dailylifewithamonstergirl.fandom.com/wiki/Devil?oldid=62710"
Community content is available under CC-BY-SA unless otherwise noted.