"Doppel" (real name unknown) is a member of the M.O.N., where she acts as the team's infiltrator. Despite claiming to be a Doppelganger, she is actually a Shapeshifter.

Doppel's default form has the appearance of a small, petite young girl. Her skin is dark, she has very long light-colored hair and black sclera. However, this is not her real form. It's unknown what her real form looks like, but is implied to be very eldritch, being called a "faceless existence".[3] Indeed, Doppel herself admitted that if humans were to see it, "their mind wouldn't be able to handle it".[1]

Doppel seems to be a natural trickster, taking delight using her powers to prank people and loves seeing people freak out. It is said she often takes jokes too far.[3] However, Doppel prefers to prank those who deserve it, such as criminals, as it is easier to avoid punishment that way.[2]

She also seems to have a slightly sadistic side, and is not the most sympathetic of people; almost eagerly letting Smith attack the Orc Leader when she wanted to punish him. (Although, she did have some cause to be peeved with him.)

She and her team were first seen when called in to deal with a gang of Orcs that had taken over a Libido Dojin where she disguised herself as a girl from one of the Dojin to draw the Orcs' attention. When the rest of the team showed up, she revealed her true form and attacked one of the Orcs. They later came to Kimihito's house with Smith and the others for dinner.[4]

Later when Kimihito caught a cold, Smith took time out from her heavy workload to "treat" him herself, leaving an angry and overworked M.O.N. to do all the work themselves. While Smith stated it was to keep the homestays away from the sick Kimihito to avoid a viral mutation, she simply wanted to slack off. However, when she caught his cold, her coworkers refused to help her for the same reason.[5]

After the Director was webbed up by Rachnera and managed to call the police, M.O.N. were assigned to apprehend the Arachne (although Doppel was annoyed she didn't have anything to do), however she escaped. Later on they tracked her down to a warehouse where Sumisu agreed to having her transferred to Kurusu's household.[6]

Later on, when Kimihito was sent a death threat. M.O.N. were assigned to act as guards while Sumisu went on a "date" with him, however the operation failed when Miia and the rest of the girls arrived.[7]

During M.O.N's day off, she was asked by her teammates to participate in their plan to date Kimihito to lure out "D" but she gave the excuse of it "not being her scene". She instead secretly stalked them on their dates in disguise. She was found out at the end of Manako's date and was attacked by her team. Upon being hit by a tranquilizer dart from Manako's gun, she reverted back to her default mode, much to everyone's surprise. Later in the evening, as she was carried by Tio, she then confessed that she was the "D" who wrote the original threat. Doppel explains that she heard Smith complain that Kimihito kept getting more homestays while not being able to decide which one to marry. Doppel decided to write the letter to force Kimihito to get closer to one of them and asks if it worked. Zombina explains that the letter caused Kimihito to get closer to all of them, much to Doppel's dismay. When Zombina asks her why she didn't tell any of her partners, Doppel admits it was too much fun seeing M.O.N. work hard to find the culprit while not realizing it was her, with Zombina and Manako acknowledging that that's just the kind of person Doppel is. Doppel then confronts the three and forces them to admit they enjoyed their dates, which they all agree on. They then express their surprise at how Doppel was capable of writing the poetic second letter, only for a confused Doppel to reveal she only wrote one letter. [8]

Doppel and the rest of M.O.N showed up to Polt's Gym to watch Centorea and her mother joust. [9]

She later appeared at the hospital along with the rest of M.O.N after Zombina lost her tooth. After learning Yuhi had turned into a zombie, they were put under house arrest. [10]

However, when Kimihito and Lala are apologizing for what happened Doppel and the others weren't angry at all, and were actually happy to finally be on a break. Doppel along with the others decided to take Kimihito on his deal and decided to each go on a date with him. [11]

During her date with Kimihito, she decided to spend the day pulling pranks. She revealed that it was difficult to pull pranks with Zombina because she was so impatient. When she notices Lilith robbing the Bike Cop she decided to target her first. She used Kimihito as bait to lure her in, which actually worked. While Lilith was about to sexually assault him, she took the opportunity snap a picture which caught her by surprise. When Lilith turned to see who it was she thought it was Rachnera, but it was really Doppel who had shapeshifted to look like her. At first Doppel was surprised that Lilith's hypnosis didn't work on Kimihito but she turned out to be wrong, because he asked her to wear clothes.

Later on she talked to Kimihito about his bad acting and then noticed Draco trying to talk to Liz who was irritated with her do to Liz being busy. Doppel takes this opportunity to stage a fake argument and apology between two couples, which was really herself and Kimihito in disguise. Draco taking notes from this attempts to do the same thing with Miia but unfortunately fails. They soon find out that one of the Orc leader was back in town and decides to go after him. When he shows up and attacks Draco she decided to shapeshift as Lilith to lure the orc away into an alley.

At first her plan was working but unfortunately for her Lilith's small form was too slow which led to her getting grabbed by the Orc. Reacting quickly Kimihito threw the "real" Lilith whom was still tied up. Taking advantage of this distraction, Doppel changed her shape into a frightening looking creature, which terrified the orc. After turning him in, Doppel thanked Kimihito for saving her, and offered to doing something special for him shape shifting into a naked Miia and later one of the ANM48 girls. However, to her surprise, he asked for her personally to do something for him, which embarrassed her. It's revealed that he wanted her to wear an outfit he picked out for her, which she wore without complaining. However after getting looks from her teammates she stated she was more embarrassed about people staring at her wearing clothes instead of being naked. [2]

Doppel later appeared with Zombina after she captured two of their male co-workers and making them confess their reason for not looking Manako in the eye, which they revealed to be a misunderstanding and were actually worried about her seeing into their "dark minds". She and Zombina warned them to not try anything on her. She was later informed about the three dangerous extra specie girls coming to the country. [12]

She appeared at the end of chapter 46, when the M.O.N came to Kimihito's house. When out of nowhere Curie attacked Zombina.

After the incident, in chapter 52 she and the rest of M.O.N found Suu wandering around by herself and decided to give her a ride home.

Later in the prologue of Monster Musume: Monster Girls on the Job! Ms Smith, accompanied by the M.O.N members, comes to the Kurusu house to recruit Kimihito's household girls as testers for the Liminal Employment Pilot Program. However, when Ms Smith reveals that she has also assigned the M.O.N girls as backup, Doppel of the four girls is the one who most expresses her reluctance to do this, as she doesn't want to do any job that doesn't involve "beating the crap outta bad guys". Eventually, however, Ms Smith is able to persuade the girls by stating that they will get a bonus for completing the mission. 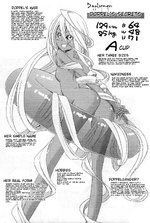 Shapeshifters are a race of beings that can take on any appearance they desire and are known as "shadow people". Although their true forms are unknown, they are said to be quite eldritch. It is believed they are related to a being called the "Faceless God".