‟I’m a Dragonewt! The king of all reptiles... No, the king of all animals! Brethren of Dragons carrying their royal blood! I am Draco the Dragonewt!” - Draco revealing her true self to Miia.[1]

Draco is a Dragonewt, a species that is descendant from dragons. She is a minor antagonist that attacks Miia on her date with Kimihito in a misguided attempt to become friends with her. She was considered a suspect to the threatening letter sent to Kimihito, but was revealed to have no knowledge of such.

Draco is a very androgynous and flat-chested young woman, to the point where people who don't know her think she is actually a bishōnen man.

As a Dragonewt, Draco has split pupils, fangs, a large reptilian tail and matching scaly hands. The most noticeable feature are her sizable wings, but she can easily hide them under her clothes when necessary, which often leads others to mistake that she is actually a Lizardman.

In her debut, she wore a high-collared shirt with a light coat thrown over. It hid her wings, and her tail is able to fit through specially modified trousers. She has standard dress shoes. Her appearance resembles a classy-yet-suave man.

She has a reverse scale, a place no one should touch.

While being presented as a polite, chivalrous, calm, and kind fellow at first, Draco is shown to have a more sadistic, bloodthirsty, egomaniacal, and arrogant side, having strong belief in her Draconic superiority, to the point of being insulted upon being mistaken for a Lizardman. She seems to have a great and unexplained hatred of both Humans and men and prefers to be around other reptiles.[1] She considers men to be savages despite considering herself the "king" of other species and attempting to molest Miia on impulse. Draco is self-righteous to a fault, utterly failing to see or realize that she is constantly in the wrong due to her abrasive and pompous nature.

Despite clocking in a strong-willed and arrogant persona, she gets extremely embarrassed when seen in her undergarments.[1] She is also surprisingly squeamish, as she was distressed by the idea of having to clean fish.[2]

She has shown a lesbian attraction to Miia, and actually went as far as to forcibly undress her. Even after that, she claimed she merely wanted a reptilian friend akin to herself.[1] In fact, Draco seems to be attracted exclusively to reptiles, as she instantly tried to hit on Liz as well upon first seeing her, despite Liz being a "mere" Lizardman.[3] Consequently, however, Draco's brash decisions and impulsive actions have costed her dearly all the time, as her sexual assault on Miia had left beyond a terrible impression of her, resulting in earning the Lamia's disliking of her. She is blind to her own failings and insecurities, which have caused her to act out of line and attempts to reconcile and her halfheartedness have led her to more ruin and humiliation, resulting in her gaining the worst thing a fool for love could receive - hatred by the objects of their affection.

Draco has been proven to be incredibly slow or uncaring in some cases, as it took her several chapters to realize that Miia was angry with her after attempts in raping her.

During a date that Kimihito had with both Miia and Mero, Draco appeares after Miia accidentally slithers over her tail, leaving because of Kimihito was paying more attention to Mero participating in an aquatic show. Bonding over the fact that they were both reptillian Liminals, Miia accompanied her believing Draco to be a male Lizardman. While spending some time with her and eventually going on a boat ride through the lake, Miia eventually learns of Draco’s true intentions. Stating that Miia should leave Kimihito and be with her and to forget men, especially human men. After making some motions that infer to sexual assault, she is stopped by Kimihito ramming a boat into theirs and capsizing both. On shore, Draco tries to attack them, but is interrupted by Kimihito, who, after a struggle, accidentally rips of her clothes. This not only stops her, but also revealing her true gender. She then runs away in embarrassment and is later caught by Tionishia and Ms. Smith, charged for being outside without her host. Her status and punishment are that she's currently on probation and will suffer a more severe punishment if she does so again.[1]

Some time later, while doing community service with Polt, she sees Kimihito again and tries to attack him but Suu, with poison from tasting the poisonous plants in her, spews water at Draco, furthermore paralyzing her. Suu then proceeds to molest her into submission. After recovering, she continues her community service of catching American Catfish while complaining and being generally squeamish.[2]

A while later, Polt decided to continue the punishment by having both Draco and Lilith run a full marathon with her. Afterwards, these two were never caught on their own again.[5]

She later appeared in Chapter 34 in alongside Lilith, since she was looking for Miia, but a misunderstanding leads to a fight between Draco, Lilith, Liz and Kinu, which Smith quickly ends.

When Kimihito was helping Doppel with her pranks, Draco tries to make advances towards Liz, who angrily intimidates the Dragonewt into leaving her alone as she is currently working. Depressed, Draco walks away and reflects on how ever since the incident at the aquarium with Miia, nothing has gone her way. She then notices Miia is actually sitting at a nearby cafe. Draco starts to approach Miia but stops when she is startled by a fighting couple, which, unbeknownst to her, are actually Doppel and Kimihito in disguise. The two's act makes Draco realize that Miia might be mad at her for the aquarium incident. Draco tries to figure out how to apologize to Miia when she sees another couple, again Doppel and Kimihito in different disguises, getting flowers. Draco gets a bouquet of flowers and a small teddy-bear and gives them to Miia and apologizes for her past actions.

Miia does forgive Draco, but then the two are approached by Liz, who tries to thank Draco for giving her the same bouquet of flowers and teddy-bear. This confuses Draco and angers Liz and Miia who beat Draco for being half-hearted. Shortly afterwards, however, Draco finds herself sexually assaulted by the leader of the Pioneer Orc Renaissance Kinsmen, who escaped custody. Draco is saved when Doppel transforms into Lilith and grabs the Orc's attention, who begins to chase her instead.[6]

Draco later appears in Chapter 48 at the Inter-species Cultural Exchange Exposition, where she impresses Miia as a tester for a home heating system. However, Miia completely ignores her and Draco suffers even more embassment almost immediately as the swimmsuit she is supposed to wear (according to her contract, which she has not read in full) turns out to be the wrong gender, since her co-workers have not noticed that she is a woman.

Later in Chapter 63 Draco follows Miia to her home, but when she reveals herself, Draco is quickly assaulted and molested by Miia´s Friends (although they quickly realize Draco is not a man, they don´t seem to care). 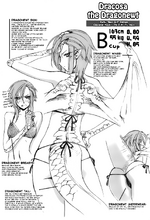 Dragonewts (ドラゴニュート, Doragonyūto), also known as Dragon-kin (ドラゴンメイド, Doragon-meido), are a reptilian demi-human race said to be descended from dragons. Possessing scales and draconian wings, a dragonewt's scales are stronger than steel and as such they can block all cutting weapons and even deflect bullets.

Retrieved from "https://dailylifewithamonstergirl.fandom.com/wiki/Draco?oldid=62092"
Community content is available under CC-BY-SA unless otherwise noted.