Dragons (竜 Ryū) are a reptilian demi-human race deeply embedded in mythological history around the globe.

Regarded as legendary beings, Dragons are held in high esteem as demi-gods and beings of extremely high reputation. Sometimes portrayed as hoarding treasure and said to breathe fire or to be poisonous, humans in medieval time often sought to make a name for themselves as "Dragon Slayers"; warriors who specialize in fighting, hunting and killing dragons.

While some Dragons can transform into humans to conceal themselves, others prefer to hide in dungeons and caves away from human civilization. 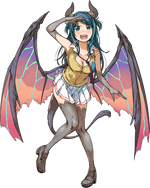 Gargoyles are a demi-human race of sea dragons whose origins in human mythology start in the Christian legend of France.

In the legend, a terrible sea serpent known as 'the Gargouille' one day emerged from the Seine River and began to spew water about the country side to create a great tidal wave. Whatever the waters did not kill, the dragon devoured for its meal.
The archbishop of Rouen, St. Romain, intended to put a stop to the problem. Legend has it that all it took to calm the dragon was the symbol of the cross made by St. Romain's fingers. At the sign, the dragon fell docile, and the archbishop bound the dragon by the neck and led it back to the local township. The people condemn the dragon to die by fire, since it killed so many with water. The people burn the creature, and they cast the pile of ash it left behind into the Seine River, from where the dragon first had come.

Regardless of the authenticity of this legend, Gargoyles are now regarded as personifications of evil who paradoxically serve as protectors from other evil creatures (possibly as penance for what the Gargouille did).

Chione is a Gargoyle

Based on Chinese Mythology, Huan Longs are Chinese dragons that are color yellow, hence their names, this  species should not be confused with Ryu-Jins, since they are far different due to racial terms.  Also they appear to be similiar to Lamias, possessing the upper body of a humanoid but the lower half are those of a dragon's tail.

Fan Long is a Huan Long 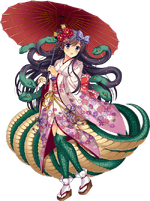 Yamata no Orochi (八岐の大蛇, "8-branched giant snake") or Orochi, is a legendary 8-headed and 8-tailed dragon subspecies that resides in Japan. Possessing similar traits to the Hydra, they possess eight serpents attached to their head and have eight serpentine tails.

Kagachi is a Yamato no Orochi

The Quetzalcoatl is a serpentine Dragon subspecies that languished in Mesoamerica (Mexico) where they are worshiped as the "feathered serpent" gods of wind and learning; regarded as being responsible for giving Mesoamerican society books, the calendar and maize (corn). They are also regarded as a symbol of death and resurrection and were the patron of the priests of ancient times.

Retrieved from "https://dailylifewithamonstergirl.fandom.com/wiki/Dragon?oldid=61016"
Community content is available under CC-BY-SA unless otherwise noted.