Dryads, or Tree Nymphs, are mono-gendered (female) pseudohumans that appear as tree spirits in Greek mythology. An incredibly long-lived species, dryads have more in common with the common plant than they do with any animal; for example the leaves on a dryad's head are fully capable of photosynthesis and their "legs" act as roots that they can imbed into the ground to absorb soil nutrients.

A taciturn species with little social interaction, when a dryad chooses to "set roots" within a forest, the forest's natural health greatly increases and the dryad acts to protect and preserve the forests they inhabit. They have a love for the trees, forests, and music and have learned to master abilities to shape trees to their will while not harming the tree itself. They tend to hate individuals and species who wreck forests for lumber and farmland and pyromaniacs.

Dryads are not very talkative and do not interact socially as much as other liminal species do. Due to this, some Dryads end up being nearly mute due lack of practise in communicating.

As a plant-base species that can absorb sunlight through their bodies to become healthy, Dryads do not see the value in covering their bodies behind clothes like other liminal cultures do and so remain purely naked to expose as much of their bodies to the sun's rays as possible. 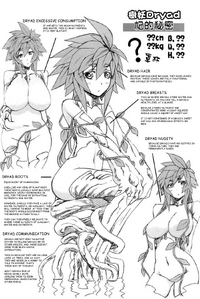 Alraune (アルラウネ, Aruraune) are a pseudohuman sub-species of dryad with flower-like qualities. Like other plant-like species, they are timid and prefer to not move around a lot, but as they use cross-pollination rather than self-pollination to procreate, they do require interaction with other species (primarily humans) and as such are noted for being more friendly toward other species than other plant-like beings.

Noted for being carnivorous (both literally and sexually), the species is known for sharing a symbiotic relationship with Papillions where, as the Alraune lures prey in with their sweet smelling nectar (which also doubles as an aphrodisiac), the Papillion would paralyze the prey with their scales, whereupon they would both feed upon the helpless prey.

The humanoid body of the Alraune is referred to as their "pistil" (the reproductive bodypart of the flower). Over time the Alraune pistil evolved beyond the typical pistil seen in most flowers to possess the appearance of an attractive humanoid female so that it could act as an attractive lure for a more diverse range of pollination partners.

Barometz are a psuedohuman race possessing characteristics of a sheep or goat. With legends surrounding the race stemming from Central Asia; where they are said to be birthed by an as-yet-unknown plant, while possessing numerous similarities with the Pan, Barometz are actually plant-like beings like the Dryad, Mandragora and Alraune.

Like the wool on a Pan, Barometz possess a coat of cotton that requires occasional shearing.

The name of this species is a reference to the Vegetable Lamb of Tartary, with said plant having a "scientific name" (the name actually predate the modern usage of scientific names) of "Planta Tartarica Barometz" 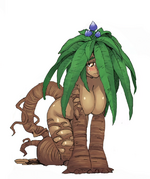 Mandragora, also known as Mandrakes, are a pseudohuman sub-species of dryad with rootlike qualities. Preferring solitude, even among the timid plant-like species, Mandragora are known for being exceptionally timid and cowardly, although this is not so much due to xenophobia as being due to extreme shyness.

Unlike the legends associated with them, the scream they emit when removed from the ground is not fatal, but as their scream is very loud, it does sometimes cause loss of consciousness in those standing in the vicinity. 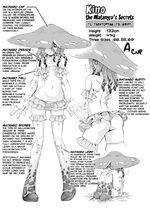 The Matango is a pseudohuman sub-species of dryad with fungal qualities.

While very similar to Dryads in that they are fully capable of photosynthesis and their "legs" act as roots that they can embed into the ground to absorb soil nutrients, Matangos are feared due to the belief that the species has a parasitic reproductive cycle; whereby they produce spores that infect other beings with mushroom growths that will eventually convert them into a Matango, but this is only a rumor, as Kino´s Secrets confirm that Matango do not reproduce through their spores. Matango do emit spores that may upset those that have asthma or related allergies. Sometimes these spores also poses hallucinogenic properties. 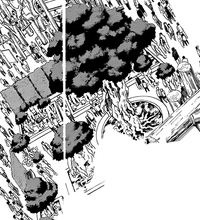 Treefolk are pseudohumans that are best described as anthropomorphic trees. Varying in appearance, it is discerned that Treefolk match the appearance of the trees or forests that they reside near. They also share the same strengths and weaknesses of trees. While their skin is extraordinarily tough, and very much like wood; they are vulnerable to fire and chopping blows.

Treefolk are said to be an extremely patient and cautious race, with a sense of time more suited to trees than short-lived mortals. The largest of their kind are said to be strong enough to tear apart stone.

Retrieved from "https://dailylifewithamonstergirl.fandom.com/wiki/Dryad?oldid=61336"
Community content is available under CC-BY-SA unless otherwise noted.