Elda is an Elder Devil that appears in Monster Musume: Everyday Life with Monster Girls Online.

As an official of the liminal exchange program Elda helps the homestay girls reach their full potential by raising their level cap without using a duplicate card.

She has long straight white hair, bat like wings on her back, horns, and a devil tail. 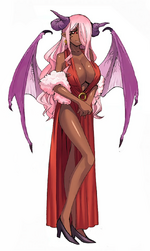 Elder Devils (エルダーデビル Erudā Debiru?) are devils that have the bodies of humans in their adulthood. Appearing even older than Greater Devils, they are the voluptuous/highest class of Devil, and boasts the largest average wingspan.

Retrieved from "https://dailylifewithamonstergirl.fandom.com/wiki/Elda?oldid=63042"
Community content is available under CC-BY-SA unless otherwise noted.