Ena is a Melusine that appears in Monster Musume: Everyday Life with Monster Girls Online.

She has fair skin, blue eyes, and long blonde hair. She has small purple bat like wings on her back and a dark purple snake tail lower body. She has a few necklaces on, carries a red purse, a long sleeve pale blue almost white vest, a pink shirt, and a blue skirt with a floral pattern on. 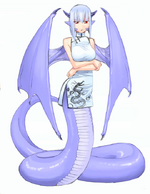 Retrieved from "https://dailylifewithamonstergirl.fandom.com/wiki/Ena?oldid=59502"
Community content is available under CC-BY-SA unless otherwise noted.