Eris (エリス) is a Elf that appears in Monster Musume: Everyday Life with Monster Girls Online.

As an elf Eris has long pointy ears, still mostly looking human. She has long blonde hair that splits off to the sides, and she has green eyes.

She is usually seen carrying around a harp, she wears a blue and pale green dress with an opening at the chest, with a white short thin dress to cover her chest. She also has on curly toe shoes. 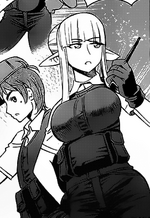 Elves (or Alfs, Albs, Alfr) are a humanoid liminal species that are physically identical to humans in nearly every way but for their ears being more elongated than a typical human's ears.

Described in (Norse-)germanic mythology (called "Alfr" or "Albs") as a highly magically inclined race, they are legendary for possessing long lifespans and slender/attractive figures; bearing no cosmetic imperfections or blemishes.

Retrieved from "https://dailylifewithamonstergirl.fandom.com/wiki/Eris?oldid=60103"
Community content is available under CC-BY-SA unless otherwise noted.