Fere is a Wyvern that appears in Monster Musume: Everyday Life with Monster Girls Online. 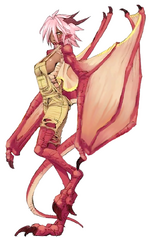 Wyverns (ワイバーン, Waibān) are a subspecies of Dragonewt.
Unlike Dragonewts, their arms and wings are one, meaning their wings are large enough to fly instead of gliding, and they are very good fliers. They are much more wild than the usual dragonewt and ryu-jin, and are extremely aggressive. However, it might be because they perhaps resemble harpies, they are not particularly intelligent, and they are easily deceived.

Retrieved from "https://dailylifewithamonstergirl.fandom.com/wiki/Fere?oldid=62451"
Community content is available under CC-BY-SA unless otherwise noted.