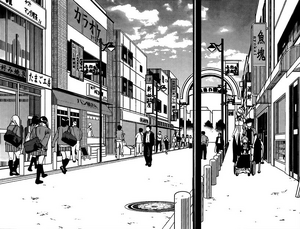 With the area marked by an overhead sign that is typical of Japanese shopping streets/arcades, many neighborhood-owned shops reside along the shared pedestrian avenue.
Such shops include butcheries, bread and cake bakeries, fishmongers, locally-grown vegetable stalls, karaoke clubs, breweries, several eateries and various cafes.

As is the case with many of the shopping districts in Japan, many of the shopping street's shops are family run/owned businesses that have been passed down from generation to generation. Due to this, the shops share their own community and often act to support each other through complimentary and/or symbiotic relationships (the fishmonger, butcher, green grocer, baker, etc) although competitive business between shops is not unheard of, 'specially between cafe's and restaurants (which often results in family feuds).

Retrieved from "https://dailylifewithamonstergirl.fandom.com/wiki/Friendly_Connections_Market?oldid=46556"
Community content is available under CC-BY-SA unless otherwise noted.