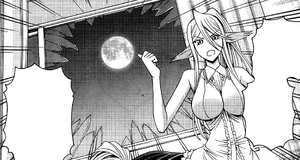 The Full Moon (満月, Mangetsu) has a powerful effect on liminals; making their carnal desires more pronounced and reducing their self-control.[1][2]

During the full moon, this combined with the possibility of Kimihito being able to marry one of them caused the girls to lose their control and use their strength in full, to the point where he feared for his life.

Amusingly enough, the way to apparently reduce the effects is to literally cool their heads. The morning after, it was shown that the girls have little to no recollection of their behaviour while under the effects of the moon.

After learning of this firsthand, Kimihito determined that his home stays must go to bed early on nights with a full moon, and has apparently not had another incident since. However, in reality the girls (Miia, Centorea and Rachnera) were constantly affected by the moon and driven to sleep with him, but had worked out a system to keep each other in check and if that didn't work out, they arranged to have Suu stop them before they entered Kimihito's room.[1]

While the full moon affects almost all Liminals without fail, Liminals who are aware of their behavior and who want to avoid losing control often drug themselves with sleeping pills beforehand. Due to this, they'll be too sleepy to indulge themselves.[2]

Only one race of Liminals is notably immune to the effects of the full moon, Satyrs. This is explained due to fact that Satyrs are already so lustful and have so little inhibitions to begin with, that the full moon simply cannot affect them more than they already are.[2]

Retrieved from "https://dailylifewithamonstergirl.fandom.com/wiki/Full_Moon?oldid=52333"
Community content is available under CC-BY-SA unless otherwise noted.