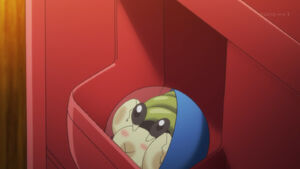 Gashapon (ガシャポン) are a variety of vending machine-dispensed toys that are noted for being packed within plastic balls, or 'Capsules", of varying size.

Imported from the USA in 1977 by Bandai, Gashapon machines are similar to the coin-operated toy vending machines seen outside of grocery stores and other retailers in other countries. While American coin-operated vending toys are usually low-quality products sold for a few quarters (US$1 or less), Japanese gashapon can cost anywhere from ¥100–500 (US$1–6) and are normally a much higher-quality product. They are often constructed from high-grade PVC plastic, and contain more molding detail and intricately painted features.

Retrieved from "https://dailylifewithamonstergirl.fandom.com/wiki/Gashapon?oldid=16244"
Community content is available under CC-BY-SA unless otherwise noted.