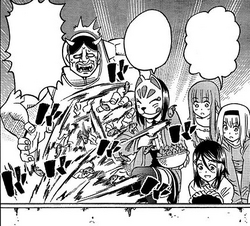 Goldfish Scooping (金魚すくい, 金魚掬い Kingyo-sukui) is a traditional Japanese game in which a player scoops goldfish with a special scooper. Japanese summer festivals or ennichi commonly have a stall for this activity. Both children and adults enjoy the game.

In the game the player scoops goldfish from a pool with a paper scooper called a "poi" and puts them into a seperate, water-filled, bowl. The game is over when the poi's paper is completely broken (due to being drenched in water) or incapable of scooping properly.
In competitions, the player with the most goldfish scooped into their bowl wins.

Retrieved from "https://dailylifewithamonstergirl.fandom.com/wiki/Goldfish_Scooping?oldid=32205"
Community content is available under CC-BY-SA unless otherwise noted.