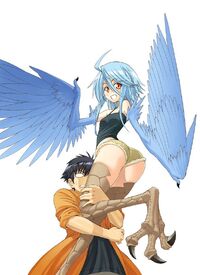 The Harpy race (ハーピー族, Hāpī-zoku?) is a mono-gendered (female) demi-human liminal race with the body of a human and the wings and talons of a bird. They colonize mountainsides and similar places.

A pure and cheerful race that loves the blue sky and singing. Unfortunately, most of the time, they only sing for other harpies.

Harpies are migratory beings and a race that embodies the notion of freedom, going where they please, when they please. Being similar in nature to migratory birds, Harpies psychologically can’t stay in one place for very long. However, due to their air-headed personalities they more often then not forget about their "rules" and just do what they please, with that rule being: "Harpies are not allowed to stay a long time in a place. ESPECIALLY at a guy's place."

Harpies have a clawed, opposable digit on the joint of each wing, and the wing at the joint has a "palm" which can curl to some small degree. This allows for gripping of objects, but these improvised grabbers are nowhere near as dexterous as true hands. Since all harpies hatch from eggs, there's a possibility that the clawed opposable digits served to help them crack the inside of their eggshells (pipping) when they hatch as harpies don't have beaks like traditional birds do.

Harpies are mono-gendered and rely on humans to reproduce. Unlike most such races, though, harpies do not simply abduct men for the purpose. Rather, they travel about and find men before returning to the village to lay their eggs after mating, sometimes even finding multiple partners in a single outing to encourage genetic diversity. Despite this, some harpies will occasionally choose a mate for life, and will either move to be with them or else continually return when their migration routes bring them back around.

When human representatives arrived with the intention of including their race in the exchange program conducted through the Cultural Exchange Between Species Bill, a majority of the harpies did not intend on applying due to the various laws they would be expected to follow. However, some applied on a whim, being true to their nature. 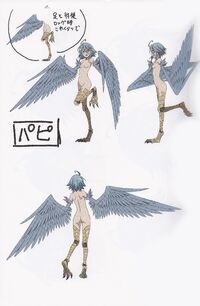 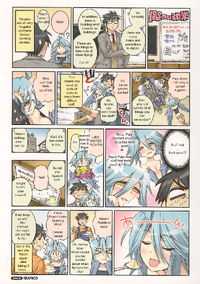 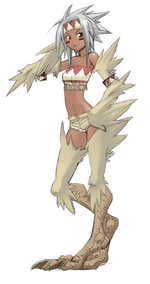 These harpies still have slight frames but are nearly twice the size of other harpies, making them quite tall. Their wings would be a little more dexterous than a common harpy's, as they do not have large pinions to obstruct movement.

Poultry Harpies (家禽種, Kakin-shu?) are a harpy subspecies adapted for laying eggs. They cannot fly and are unable to run at high speeds like land animal harpies. However, they produce far more eggs than other subspecies, and they continuously lay eggs nearly every day. Poultry harpies have a red crest on top of their heads. Unlike chickens, their appearance is natural, not selectively bred. They are very cowardly, or chicken. 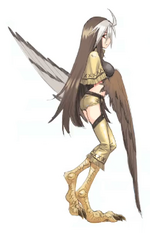 Raptor Harpies (猛禽種, Mōkin-shu?) are large eagle- or hawk-like harpy subspecies. Their bodies are very similar to human bodies. Though other subspecies are omnivorous, raptor harpies are strictly carnivores. They are proud and difficult to please, an unusual trait among the generally amicable harpies.

As hunters, raptor harpies are strong and proud, and are not as easily-impressed by other harpies. Being a predator takes a degree of cunning and consistent knowledge of the terrain and situation, so raptor harpies would be the most intelligent of the harpy species, though that doesn't mean they're particularly smart by human standards. 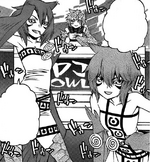 Owl Harpies are an owl-like harpy subspecies. Due to being a nocturnal species, Owl harpies have excellent night vision. They also become more active after sunset and seem to be much more intelligent than their airheaded cousins. 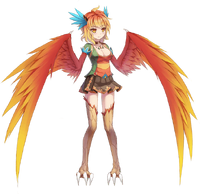 Garuda (ガルーダ, Garūda?) are a large Harpy subspecies prevalent in Hindu mythology. Regarded by Hindu lore as the King of all Birds and the mount of the Supreme god Lord Vishnu, Garuda are considered the strongest of the harpy subspecies and are known for their eternal animosity with the Naga serpent race.

Vermillion Birds are a demi-human subspecies of Harpy who are identified by their red pheasant-like feathers, five-colored plumage and being perpetually covered in flames.

Considered to be one of the four mythical animal tribes of China (alongside the Azure Dragons, the White Tigers, and the Black Turtles), all four of which are kept in balance by the Huang Long race, the Vermillion Birds are elegant and noble in temperament and represent the element fire, the southern provinces of China and the season of summer.

Retrieved from "https://dailylifewithamonstergirl.fandom.com/wiki/Harpy?oldid=63021"
Community content is available under CC-BY-SA unless otherwise noted.