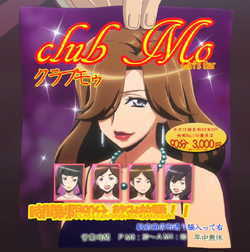 Host and Hostess Clubs are a common feature in the night-time entertainment industry of Japan. They employ staff and cater to clients of specific genders; serving drinks and attentive conversation. The staff who tend to the clients, known as Hosts or Hostesses, light cigarettes, pour drinks, offer flirtatious conversation, and sing karaoke to entertain customers; basically acting as "hired boyfriends/girlfriends" for the night.

In addition to their on-site duties, hosts/hostesses are generally obliged to engage in paid dates with patrons outside of the bar and regular working hours. This system generates repeat patronage of a particular bar by developing attachments between particular customers and hostesses. Sometimes sex occurs on these paid dates. Hosts/Hostesses may be deducted pay for not having enough dates.

Retrieved from "https://dailylifewithamonstergirl.fandom.com/wiki/Hostess_Club?oldid=17224"
Community content is available under CC-BY-SA unless otherwise noted.