Ils Nineta[2] (ルズ・ナインティ, Ruzu Nainti), is a Kyuubi no Kitsune (Nine tailed fox) who works at a Shinto Shrine as a miko.

Despite her young looks she speaks in a manner which is closer to that of an elderly person as opposed to a child. However, she is still rather childish and enjoys playing pranks on others when she is not working. When she transforms into an older version of herself she drops this childlike behavior in favor of a more mature sexualized flirtatious persona. Also when she is in her older persona she has no shame in appearing scantily clad or naked as she feels what people are seeing is not really her body when she transforms. She also seems to have become more daring because, when she transforms, she began to expose herself more to her chest.

Ils has an intense interest in Japanese culture, which stems from her watching a lot of anime. It is this interest that drove her to join the exchange program and become a shrine maiden. Ils enjoys her job as a shrine maiden and works hard to draw visitors to the shrine in hopes of being rewarded by the shrine's master with inari sushi.

So far she doesn't own any possessions other than those which have been "made" for her.

At some point, Ils wanted to join the exchange program. While she was waiting in line for an interview, a Killer Bee got impatient and tried to fly to the front of the line.[4] 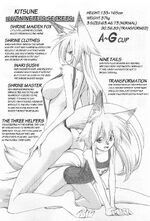 Kyuubi no Kitsune (lit. Nine-tailed Foxes) are a psudeohuman race that appear in Japanese folklore as intelligent beings that possess magical abilities to shape shift. While some folktales speak of kitsune of wildly different moralities employing this ability to trick others, other stories portray them as faithful guardians, friends, lovers, and wives. It is unknown if male Kitsune exist (as Kitsune can use both genders in their shapeshifting abilities) or if they are a single-gendered race.

Retrieved from "https://dailylifewithamonstergirl.fandom.com/wiki/Ils_Nineta?oldid=63079"
Community content is available under CC-BY-SA unless otherwise noted.