Inari Sushi (稲荷寿司, Inari-zushi?) is a type of sushi consisting of a pouch of fried tofu typically filled with sushi rice.

It is named after the Shinto god Inari, who is believed to have a fondness for fried tofu. The pouch is normally deep-fried tofu, however, regional variations include pouches made out of a thin omelette. Other versions of Inari Sushi include green beans, carrots, and gobo (the taproot of a Japanese Burdock) included in the rice stuffing. 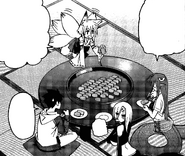 Retrieved from "https://dailylifewithamonstergirl.fandom.com/wiki/Inari_Sushi?oldid=47254"
Community content is available under CC-BY-SA unless otherwise noted.