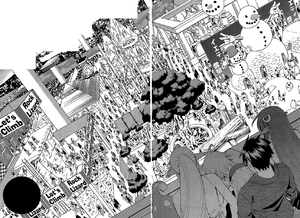 A booth where the Minotaur Cathyl and the Pan Merino teach eager young men on how to milk cows and sheep.

A large event where Liminals seeking to enter the exchange program can find suitable host amongst volunteers. First the humans fill in a sheet with their preferred Liminal race or traits, then they are paired with suitable Liminals to interview in private, and then the chosen pairs move to the party hall for a rendez-vous. There are seperate events for both male and female Liminals.

A large aquarium where attendants wearing scuba gear can swim together with various Mermaids.

A tournament where people holding shields can test their strength against jousting Centaurs. The winning human recieves a reward.

A stage where three Lamia preform a traditional Lamia dance for the audience. Nearby is a booth where humans can experience being wrapped up by a Lamia's tail.

A booth where Polt and several other Kobolds advertise their sports club, including the numerous Liminal-friendly training devices.

A booth that serves to prove that not all blood-sucking Liminals are Vampires. It contains various Vampire repellants, such as UV-lights, garlic cuisine, and silver-crosses.

A booth that contains various items to help experience life as a vampire, such as coffins to sleep in and bats to interact with.

Utilising traditional night vision technology, these goggles are made and sold by a faction of Owl Harpies to aid liminals who have poor night vision abilities.

A state-of-the-art shoe designed for liminals who can not reach their feet without inconvenience, such as Centaurs. With this particular model designed to cater for cloven hooves, the Omega Horseshoe possesses remote technology so that the wearer can clasp and unclasp the shoe via remote control instead of needing to bend down to remove the shoe manually.

Special prosthetic hands that can be worn by winged liminals over their wing digits, allowing them to hold onto things easier.

A device for cleaning the tails of reptilian liminals

A wheelchair for liminals without land locomotion organs

Similar in design to a Rodeo Boy Exercise Fitness Machine (Horseback riding body training chair), the Centaur Special was designed in cooperation with the Centaur race to replicate the feel and motion of riding a Centaur. Comes with a modified saddle designed to allow Lamia and Mermaid users to sit comfortably while riding.

Retrieved from "https://dailylifewithamonstergirl.fandom.com/wiki/Inter-Species_Cultural_Exchange_Exposition?oldid=63008"
Community content is available under CC-BY-SA unless otherwise noted.