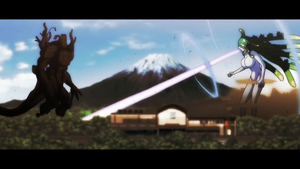 In Kaiju films, "heroic" monsters were rarely seen and it was not until later when television productions began using kaiju which aided the hero, saved civilians, or demonstrated some kind of complex personality. These kaiju adopted many classic monster traits, appearing as the "Misunderstood Creature". Some kaiju hung out with the heroes and provided comedy relief, in contrast to the darker approach to these characters from more mature franchises, like Kamen Rider. Godzilla , arguably, is the most well known of the daikaiju, has played the roles of hero, villain, and force of nature in the course of his existence; one of the few kaiju of any type to be depicted in multiple roles and having those around him react in different ways, depending on how the creature itself was being presented in the films.

Retrieved from "https://dailylifewithamonstergirl.fandom.com/wiki/Kaiju?oldid=30737"
Community content is available under CC-BY-SA unless otherwise noted.