A Kakashi (案山子 (かかし)) is a Japanese scarecrow; a humanoid decoy or mannequin that is placed in open fields to discourage birds such as crows or sparrows from disturbing and feeding on recently cast seed and growing crops.

A modern and uniquely Japanese form of scarecrow are yellow plastic balloons with one black "eye". These balloons are representations of the kami spirit Amatsumara; the one-eyed kami of ironworking who comes to the fields to protect them before the harvest. 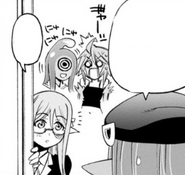 Retrieved from "https://dailylifewithamonstergirl.fandom.com/wiki/Kakashi?oldid=32679"
Community content is available under CC-BY-SA unless otherwise noted.