Keros (ケロース) is a Unicorn that appears in Monster Musume: Everyday Life with Monster Girls Online.

On her Original version, Keros has blonde hair with sky blue eyes, a blue horn on the center of her forehead, blue ears and like centaurs, possesses a lower body of a horse, though the color is also sky blue. Her clothing consists of a sky blue sweater and blue skirt with dazzling sparkle like designs on it and wears a blue braided belt.

On her alternative version, instead of wearing a sweater, she wears a white long sleeve polo and wears a long black skirt, but doesn't have any major changes in her looks.

She originally came to study in Japan to look for a "Yamato nadeshiko" (a strong but beautiful Japanese woman), but now she has developed a love for late-night anime and particularly loves anime in the harem genre where she imagines herself in the male protagonist's place.
While she is initially unwilling to live with the (male) householder, she becomes satisfied with the situation when she discovers that other virgin girls also live in the house. 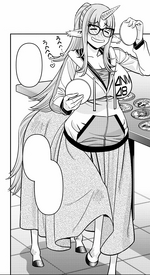 Unicorns are a demihuman subspecies of Centaur that have had myths and legends written about them since before Greecian antiquity.

Known as a symbol of virgin purity, Unicorns are said to be "only tamable by virgin women". It is also said that their horns are able to cure all diseases; resulting in a mass-hunting for the species. Hunters usually used the species' fondness for virgin women to lay traps to capture them and harvest their horn.

Retrieved from "https://dailylifewithamonstergirl.fandom.com/wiki/Keros?oldid=62989"
Community content is available under CC-BY-SA unless otherwise noted.