Kii (キー, Kī) is a Dryad who appeared after being rescued from an illegal extraspecies trafficking operation. When Papi found her, she named her Kii, since Papi stated "she looks like a tree (木, Ki)", she made friends with Papi when she rescued her, and planted her in a forest that just happened to be an illegal waste dump. She has since become friends with Suu and tolerates the presence of humans like Kimihito Kurusu.

Kii's appearance changes based on the amount of nutrients she absorbs from soil, but no matter what her hair seems to be made of leaves, and her arms and legs are plant like appendages that look like wood. When she is lacking nutrients Kii appears as a young girl shorter than Papi. In this form she can be very easily mistaken for a child. When she has proper nutrients Kii's true form is that of a buxom adult female of average height. Her breasts were also much larger and implied to be grown bigger if filled with the chemicals. If she keeps on absorbing nutrients in this form it can give the appearance that she is gaining weight.

Because she does not wear clothing Kii uses leaves and vines around her body in order to hide her nudity.

After absorbing experimental chemicals, Kii underwent a drastic change. She transformed into a gigantic tree like plant-monster, with her former adult body located inside the head. Luckily because of intervention of Papi, Suu, and Kimihito she was able to return to her child form, and eventually her true adult form.

Like Rachnera Arachnera, Kii has severe misanthropic issues due to her past dealings with humans.

When she was planted by Papi near an illegal dumping ground for a prototype super fertilizer, her hatred and anger towards humanity was also increased along with her size. Upon returning to normal, she realized that not all humans were bad, but was still distrusting of Kimihito, if only for the actions he took to remove the nutrients out of her body. Although, her younger form did say he sucked her breasts "nice and gently."

Sometime before her first appearance in the story, Kii and two other extraspecies children were kidnapped and illegally trafficked until they were rescued by both MON and the Cultural Exchange Security Squad. However, she was accidentally left behind by Ms. Smith when the traffickers were apprehended after their truck crashed, leaving Kii lost among the wreckage.

She was eventually found and planted in the mountains near an illegal dumping ground by Papi (who soon forgot about her). After absorbing experimental chemicals, she underwent a drastic change, transforming into a gigantic plant-monster as a result and attacked any human's she encountered.

When Papi returned to the mountains with Suu and Kimihito in attempt to draw out whoever D was, Kii attacked the group with the goals of capturing Papi and causing harm to Kimihito. Finding out Kii was a Dryad the group assumed she was indeed the mysterious "D". During her attack, Kii accidently knocked Suu into a vat of experimental super fertilizer, causing the slime to grow to the size of Kii's plant-monster form. After fighting a bit Suu suggested trying to remove the chemicals from Kii that had turned her into a monster. Papi attempted to do this by sucking on Kii's breasts. When Kii stopped her (using a combination of vines and bondage), Suu made Kimihito attempt the same thing. As a last effort Kii tried sucking the super fertilizer out of Suu. This ultimately resulted in all three girls present reach orgasms and return to their normal size. When Smith arrived to go over the situation she revealed Kii was unable to write and thus could not have written the death threat sent by D. Smith then offered to return Kii to her homeland, or to let her stay in the forest as its "guardian". As they were leaving, Kii asked why Papi and Suu loved Kimihito so much to which they responded "because he's nice." Kii partly agreed with the statement saying the way he had sucked her breast did feel good, earning a humorous reaction from Smith.[1]

After regaining her adult body, Kii would be visited by Kimihito and Suu again when the Kurusu household was low on food. Initially Kii refused to let the two take any edible plants from the forest, but changed her mind after being sexually assaulted by Suu. Kii led the slime and the human to an area with plants that were ripe enough for eating, but was unable to tell them which plants were poisonous to non-plant beings. When Suu revealed she could tell the difference Kii remarked that she was amazed at the slime's useful abilities. After harvesting many plants Kimihito apologized to Kii for taking more than intended, but the Dryad acquiesced to their actions as what they had taken was a small amount compared to what the forest contained. As Suu and Kimihito left, Kii asked Suu to come visit her with Papi next time so the three could play together. When Kimihito told her that was a great idea Kii quickly told him he was not invited to return to her forest. At that point Smith arrived to talk to Kii about getting a new host family, however the dryad was not interested, as she preferred the forest.[2]

Even with all the effort Smith and the Cultural Exchange Security Squad put into cleaning the forest, the amount of trash spread throughout the woods by Kii and Suu's giant monster battle had a negative affect on Kii, causing her to wither and once again revert to her child form. Seeing an opportunity for extraspecies cooperation, the Kobold race decided to take matters into their own hands and clean up the forest themselves, with Polt leading the efforts because of her past interactions with Kii as her probation officer. When scouting where all the dump sites were Kii and Polt came upon Kimihito and Tio having a picnic. When Polt excitedly explained the situation Kii responded by tying up the Kobold with vines and expressed her wishes to just be left alone, regardless of whether the trash was making her ill. Tio saw Kii's negative attitude as unacceptable and sat the Dryad in her lap and explained that everyone cared and worried about her and that they were doing their best to help, and asked Kii to take it easy on them. Kii was caught up by Tio's warm personality and agreed much to Kimihito and Polt's shock. Kii spent the rest of the day resting with Tio while Polt and Kimihito cleaned, becoming slightly agitated when Polt began napping on Tio's lap when she wanted to. Later when Tio started to help clean the group accidentally uncovered a dormant geyser and turned a portion of the forest into a hot springs. This proved to be beneficial to Kii as her species is native to a more warm and humid climate, and the warm waters of the springs caused her to refoliate. When Polt asked to build an Onsen resort at the springs Kii refused stating the construction would disrupt the forest, later she would make fun of Kimihito when he fainted in the springs, calling him a baby.[3]

When she encountered Kimihito and Cerea, who were on the run from Kiira, she noticed Kimihito sucking on Cerea's breasts, trying to extract Kiira's venom from them. She questioned whether or not sucking breasts was his hobby, reminding him he had done the same thing to her before, and was suspicious of him wanting to do the same to Tio at the hot springs. She later allowed Kimihito to use the new sauna in her forest to trap Kiira. She approved of it temporarily as long as no trees in her forest were harmed and the trash was all gone. 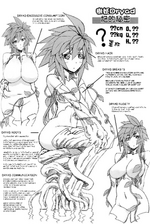 Dryads are a type of plant-like non-human species. Their qualities are similar to those of small or medium sized trees or vines.

Though they are easygoing and mild-mannered, they tend to not associate with other species (this is true of all plant-like species).

However, exceptions are made for those who do not harm them or provide them with care, and they sometimes open their hearts to helpful members of other species.

The humanoid parts of their body change according to the amount of nutrients and water they have absorbed regardless of their actual age, making it impossible to determine their age by appearance alone.

Retrieved from "https://dailylifewithamonstergirl.fandom.com/wiki/Kii?oldid=62181"
Community content is available under CC-BY-SA unless otherwise noted.