Killa is a Killer Bee who crossed the Japanese border illegally in an attempt to exact revenge on Rachnera Arachnera, using Kimihito Kurusu as a proxy.[1]

Killa has the appearance of a young woman with short, light colored hair and large breasts.

As a Killer Bee, she has four arms, with three fingers each, which are covered with a carapace. She also has carapace-covered legs and jaw. She has compound eyes, and her forehead has two antennae protruding from her forehead with what appears to be a trio of simple eyes between them. Most notably, from her back protrudes a large hornet abdomen with stinger, and two large insect wings.

Her attire seems to consist of only a black top and shorts.

Killa appears to be an extremely aggressive individual, becoming so furious upon being humiliated by a relatively harmless prank that she was forcibly deported from Japan and had her entire species classified as "dangerous". Due to her past with Rachnera, she becomes especially furious upon being confronted with Arachne thread. Kimihito, however, states that it was mostly her own fault that she got deported (which is arguably true, as she started the commotion, threatened other liminals who were waiting in line and provoked Rachnera into webbing her, and ended up exposing herself in front of everyone).

She is highly determined when angry, and will stop at nothing to accomplish her goals, such as getting revenge on those who wronged her.

However, when she is calm she can be reasoned with, as she apologized to Kimihito for endangering him to draw out Rachnera. Likewise, despite her aggressive and dangerous nature, Killa believes that, compared to herself, her fellow two illegal immigrants are truly dangerous and warns Kimihito about them.

When Killa was waiting in line to become a part of the exchange program, she became very agitated because of the long wait times. Eventually, Killa got tired of it and flew upward to get ahead, causing a great commotion and attracting the attention of Rachnera, who was also present. As Rachnera tried to warn Killa that this behavior is exactly what the officials screen for, Killa responded by insulting the Arachne. In retribution, and to calm her down, Rachnera tied Killa up in her threads. However, the Killer Bee became even more furious and struggled so hard she caused her panties to come loose and reveal her nether regions to all present.

Eventually, Killa had to be detained by several government agents as she swore to get revenge on Rachnera. Because of this, she and her species were classified as "dangerous" and Killa was deported.

Desiring vengeance, Killa contacted an underworld broker who smuggled her into Japan alongside two other Liminals.[1][3]

After finding Kimihito, Cerea, and Rachnera spending time in Kii's Forest, Killa watches them from a distance. Eventually, she uses the scent of her venom to send a large swarm of Giant Hornets after them. As Cerea fights off the hornets, Killa reveals herself and flies towards Kimihito. She then locks her legs around his waist and prepares to impale him with her stinger. When Cerea throws her sword at Killa, the Killer Bee is forced to let go of Kimihito to dodge it, and flies upwards. However, Kimihito quickly makes a fire and the smoke repels Killa and the Hornets. Too furious to stop her revenge now, Killa descends towards them but is caught in a web Rachnera spun. Recognizing it, Killa becomes even angrier and starts ripping the web apart with her teeth.

Eventually, Killa manages to free herself and finds Cerea carrying Kimihito on her back, running away. Killa pursues them and manages to catch up to them just as they enter a small cabin in the woods. Undeterred by this, Killa flies in as well, only to find herself quickly weakening upon entry. Much to her shock, she finds herself inside a steaming hot sauna and Kimihito and Cerea lock the Killer Bee inside. Overcome by the heat, Killa quickly weakens and starts begging to be let out, eventually collapsing into unconsciousness.[2]

After a while, Killa regains consciousness to find Kimihito and Cerea standing over her. Though still weakened, she immediately becomes furious again upon spotting Rachnera. This causes her to reveal to Kimihito that her real target was the Arachne, not him, due to the former being the cause of her original deportation. Killa then apologizes to Kimihito for trying to use him to lure out Rachnera and explains that she got into the country thanks to an underworld broker. As a sign of her sincerity about being sorry, Killa warns Kimihito about the other two illegal immigrants, saying even she considers them dangerous and wanted nothing to do with them. They decide to let Killa go, though Cerea warns her not to target Kimihito ever again, though she quickly adds that she is still allowed to go after Rachnera, to Killa's surprise.[1]

Later, alongside Curie and Kino, Killa was seen at a facility that processes liminal by-products in exchange for staying in Japan. She was seen giving her venom to be studied.[4] 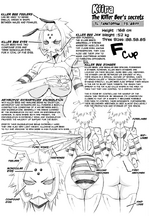 Killer Bees are an insectoid pseudohuman race who have four insectoid limbs, antennae, compound eyes, a insect abdomen complete with stinger, and wings. Though similar to the Honey Bee race in biology and societal structure, the Killer Bee race is thought to be considerably more aggressive in both philosophy and temperament and as such has been considered a problematic race in terms of diplomacy.

Retrieved from "https://dailylifewithamonstergirl.fandom.com/wiki/Killa?oldid=62094"
Community content is available under CC-BY-SA unless otherwise noted.