A Kokeshi (こけし こけし) is type of a Japanese doll originally found in northern Japan.
Traditionally handmade from wood, Kokeshi have a cylindrical trunk for a body and an enlarged head with a few thin, painted lines to define the face.
The body usually has a floral design painted in red, black, and sometimes yellow, and covered with a layer of wax. One characteristic of kokeshi dolls is their lack of arms or legs. The bottom is typically marked with the signature of the artist. 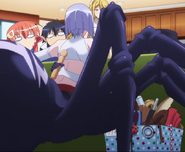 Retrieved from "https://dailylifewithamonstergirl.fandom.com/wiki/Kokeshi?oldid=48689"
Community content is available under CC-BY-SA unless otherwise noted.