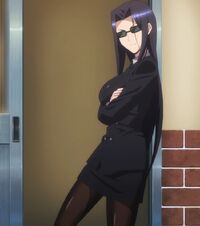 As a Cultural Exchange Coordinator, Smith interacts with many people and is normally responsible for bringing homestays and extraspecies individuals together.

Smith is assigned as Kimihito’s exchange coordinator, making her responsible for making sure Kimihito is following the Cultural Exchange Between Species Bill and that all extraspecies girls under his care are well and happy. Despite the responsibility of her position, Smith treats Kimihito informally and often takes advantage of his kindness. Smith often visits his household to check up on him and his homestays, constantly reminding him of the prohibitions and its consequences of the law as she is the one who often makes him the host of a number of extraspecies girls. Due to her being irresponsible, Smith only shows up when the situation is inconvenient for him, often providing information when it’s too late, and has a tendency to mooch off Kimihito for free home-cooked meals. She tends to manipulate Kimihito through threats based on the Cultural Exchange and its prohibitions, and will normally ignore any complaints he has when she does so.

Despite her irresponsible and lazy behavior, Kimihito is grateful for Smith’s assistance and protection. He does become rather annoyed and frustrated with her constantly waiting until the last minute to inform him about important information concerning his homestays, random or new subspecies he happens to encounter, when his own house is remodeled, food supplies, and finances or other expences. Nonetheless, he is never unkind to her. Because of his kindness, Smith appreciates Kimihito’s willingness to care for the extraspecies girls he was given and he, in return, appreciates her acting as a “guardian” to him whenever he is in trouble. As a result, Kimihito usually puts serious thought into the advice Smith does give him. While Smith does not seem to have serious romantic feelings in Kimihito, she is not above flirting with him and calling him “Darling-kun” because she finds it amusing.

Smith is the coordinator who was responsible for choosing a host family for Miia. Smith ends up placing Miia with Kimihito, despite the fact that the young man is not part of the exchange program, let alone Miia’s correct host. Despite her negligence in Miia’s placement, Smith seems to genuinely care about Miia’s well-being and happiness, as she encourage Kimihito to study snake ecology so he can make Miia more comfortable and encourages Miia to talk to Kimihito after he hurt himself protecting her.

Miia seems to respect Smith’s authority as a coordinator, but also recognizes Smith’s laziness and negligence, leading her to label Smith as a woman who “does whatever she wants”. Miia’s feeling toward Kimihito can also cause her to become jealous whenever Smith seems to have an interest in him. Smith recognizes this and avoids actively flirting with Kimihito in front of her, but she still teases both him and Miia whenever she sees a good opportunity.

Papi was initially one of Smith’s problem cases who would often run away from the home-stay to which she was assigned. Smith, looking to avoid the work of chasing her down, decides to place Papi with Kimihito in hopes that his positive influence would make her happy enough to stay. Since Papi’s placement, Smith has had no difficulties dealing with her. Smith is one of the few individuals who treats Papi like an adult based on her age, instead of a child based on her appearance. It appears Smith is ignorant to the fact that Papi is the daughter of the Police Chief, her superior.

Smith and Centorea seem to share a mutual respect for each other.

Centorea recognizes Smith’s authority as her coordinator, and usually tries to keep order in the Kurusu House when Smith is not present. When there is a problem, Centorea will often suggest calling Smith for help. However, Centorea does recognize Smith’s more foolish tendencies, like Smith commenting on her breasts during a televised duel with her mother, and can become annoyed in a manner similar to Miia.

Smith trusts Centorea significantly as she allowed the centaur to perform several actions to accommodate her cultural heritage without oversight, such as the ability pick her own homestay and keep weapons (mostly replicas), despite the fact that there are provisions in the Extra Species Law that prohibit such things. Smith also acknowledges Centorea’s strength and combat skills, as she hires the centaur to act as extra security for Kimihito when there is the possibility of him being in danger. Also, when discussing Centorea’s family, Smith is quick to say that they are one of the strongest families in the world.

As slimes are not technically part of the Interspecies Exchange Act, Smith has taken a hands-off approach to dealing with Suu in order to avoid more work. Despite their limited interactions, Suu does not like Smith’s freeloading habits, but she usually keeps her criticisms to herself. However, when she ingests poisonous materials, Suu will gladly call out Smith on her behavior.

Since Smith is aware of Meroune’s status as the princess of the Mermaid Kingdom, she treats her with greater care than the other girls. Before Meroune arrives, Smith ensures that Kimihito's house is renovated so the mermaid will be comfortable, making a waterproof room complete with a 50-foot deep indoor pool. Later, when introducing Meroune to the other girls, Smith exhibits relatively formal behavior, and avoids her normal freeloading habits while at the house. However, as time goes by, Smith becomes more prone to letting her guard down around Meroune, and has gone back to her usual freeloading off Kimihito with no second thoughts. Meroune seems to accept Smith’s authority as her coordinator, and treats her in the same overly formal way she treats everyone else.

Smith initially places Rachnera with Ren Kunanzuki’s family. However, Smith’s laziness causes her to fail to take the family’s tastes into account. She also forgets to check on Rachnera’s well-being. This negligence results in the Kunanzuki family “selling” Rachnera to the conman Kasegi. Despite these events, Rachnera does not seem to hold any ill will toward Smith.

Instead, Rachnera blackmails Smith into placing her with Kimihito. Since then, the two have not had any negative interactions with each other. In situations where something goes wrong, Rachnera will most likely try to resolve the situation herself, instead of relying on any help from Smith and the exchange program.

Lala, like Papi, was one of Smith’s problem cases who constantly ran away from her original homestay (though unlike Papi, Lala doesn’t do this because of poor memory; rather, she does it intentionally). Unlike the other girls who live with Kimihito, Smith seems to have taken a more intimidating approach to dealing with Lala, mainly due to the latter’s defiant behavior.

Smith does not put up with Lala’s Chuunibyou act, and will usually force the Dullahan to speak in conversational language instead of the complicated prose she normally speaks in. Smith also has no problem casually tossing Lala’s head to punish her if she misbehaves, like when she puts Kimihito’s homestays under a lot of distress when she sends them an ominous letter. Because of the casual way she treats Lala, Smith also seems to know that Lala is an actual psychopomp, and not just pretending. Nevertheless, her defiant behavior and fixations in harvesting people’s souls is an apparent nuisance to Smith.

Smith seems to be good friends with Polt. When Kimihito and the girls need to get into shape, Smith immediately recommends they use Sports Club Kobold in order to help Polt test her new business. In return, when Smith requests the use of Kobold Stadium so that Centorea and her mother could duel legally, Polt happily allows her to borrow the entire stadium without question. During said event, the two teasingly offer play-by-play commentary and seem to work well together, much to the annoyance of the duel’s participants.

Smith seems to trust Polt a great deal, as the Kobold is usually left in charge of extraspecies individuals that Smith puts on probation with virtually no visible oversight.

After Tionishia seized Draco who was charged for going out without her host, Ms. Smith acknowledged that the dragonewt was not the culprit "D". The Interspecies Exchange Coordinator put Draco on probation for the time being but warned the dragonewt that the next punishment would be severe.

Though Kii got into trouble attacking Kimihito, Papi, Suu, and Zombina due to her exposure to the experimental chemicals that were illegally dumped; the Interspecies Exchange Coordinator Smith proved to him that Kii was not the culprit "D" because the dryad could not write due to illiteracy.  At the time Smith had the Cultural Exchange Security Squad to clean up the forest, she gave Kii the choice of either returning to her homeland or to staying in the forest as its protector.  The dryad chose to protect the forest.

Retrieved from "https://dailylifewithamonstergirl.fandom.com/wiki/Kuroko_Smith/Relationship?oldid=50619"
Community content is available under CC-BY-SA unless otherwise noted.