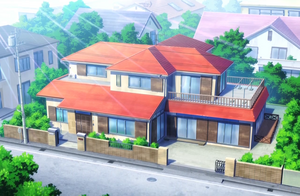 The Kurusu House is the primary location where the Monster Musume: Everyday Life with Monster Girls series occurs.

Originally a typical large, modern Japanese home, since Kimihito became involved with the Cultural Exchange Between Species Bill's cultural exchange program, the house has been renovated multiple times to cater for the needs of it's various liminal house guests.

These renovations include widened hallways and enlarged bath and toilet facilities to cater for Lamia and Centaur bodies as well as the establishment of an indoor pool to cater for Mermaids.

Following an incident where the house's attic collapsed into the floor below, the house's occupants were forced to go on a vacation while the necessary repairs were carried out.
Presumably made during these repairs, Meroune's Mother had several "extensions" made to Meroune's room; including an extended basement level accessed through her swimming pool. These "extensions" also included remote control for all of the house's systems (including air ventilation, door locks and alarms) and a security feature which, when activated, encases the house within a transparent, water-tight, tank and floods the entire premises in water.
This security feature was activated when the house became inundated with Matango spores, as purging the entire structure with water was thought to be the quickest and safest way to wash away the spores. The house was returned to normal without any notable damages shortly after the incident.

Kimihito Kurusu's room is located on the second floor and is a typical bedroom in western style. This room was destroyed when the floor of the attic collapsed, but it has since been repaired.

Miia's room is a typical westernized room with large windows and bright decorations. While she possesses a bed of her own, Miia habitually sneaks into Kurusu's room to sleep with him. Located on the second floor, her room is behind the door on the immediate right of the stairway.

Papi’s room is dominated by her overly plush bed, with various pillows having been nestled at various corners of the room. Located on the second floor with direct access to the balcony, Suu also seems to reside in this room due to the presence of a kiddie pool presumably left for her to rest within.

Centorea Shianus' room is noted to be the only one decorated in traditional Japanese style. As Centaurs do not need beds to sleep on, Centorea chose to cover the floor with tatami mats instead of carpet and opted to decorate the entire room in Japanese style. Centorea also has her armour and weapons on display in her room. She also stores her recently-acquired saddle on a rack here.

Meroune Lorelei’s room is a custom indoor pool located near the bathroom on the first floor. The pool is 15 meters deep, with its own filtration system. The water temperature is apparently kept warm enough for humans, but just a bit too cold for lamias. It also has a closet where she keeps her clothes.

Her mother later had some extensions made to her daughter's room, having several basement floors built below her daughter's pool so that she could have living quarters more befitting her status as a princess.

Rachnera Arachnera's room is located in the house's attic. Accessed via a pulldown ladder on the second floor, Rachnera keeps various artworks on the room's ceiling and prefers to sleep on hammocks instead of a typical bed; although she does seem to have one. She also has a spinning wheel here presumably to spin her threads for unknown uses. The room is directly above Kimihito’s room. The floor of this room once collapsed, but has since been repaired.

Lala's room has yet to be shown.

The Kurusu House appears as the player's home in Monster Musume: Everyday Life with Monster Girls Online. The house also serves as the starting point for every Outing Map.

Retrieved from "https://dailylifewithamonstergirl.fandom.com/wiki/Kurusu_House?oldid=62333"
Community content is available under CC-BY-SA unless otherwise noted.