Lala is a Dullahan and the seventh resident of Kimihito's house. She is the second "D", which she initially denied, telling everyone she's merely there to warn Kimihito Kurusu of his impending death.

Lala is a young, attractive, blue skinned woman with white hair, long enough to cover her back with a large ahoge the shape of a scythe sticking out, though this strand is curiously absent when she appears in the afterlife. She has a very curvaceous figure, with pear-like hips and being well-endowed. Her eyes have black sclera and gold-colored irises.

She wore a white, thigh-length dress with a black long coat. Worn over the dress and the coat, was a black-lacquered western-style armored corset with matching bicep-length armored gloves and thigh-high armored heeled boots. Wrapped around her neck, was a long back scarf.

Her most noticeable trait is her detachable head, which functions perfectly even when not attached to her neck. The insides of her neck, such as her esophagus and windpipe, are exposed and visible when her head is separated, allowing her to perform feats such a pouring liquid directly down her throat.

She is stoic, gloomy, and very cold and blunt. However she apparently suffers from Chuunibyou where Lala often claims to be an agent of Death, referring to herself as both "Death Incarnate" and "The Huntress of Death". This is to keep people from believing she is an actual Psychopomp. When working she has a more positive attitude and is shown to actually prefer helping someone over doing her job. She also shows a notable nervousness when dealing with those she is not familiar with when visiting Kimihito in the hospital after the incident with Mero and her mother.

Her relationship with Kimihito is more complicated than the other girls. Whereas many of them are trying to win his hand in marriage, Lala seems to have no interest in the matter. However, she does tell Kimihito when he dies his soul belongs to her due to her duties as a dullahan; though this could mean she is willing to wait until the end of his natural life, no matter the length, to be with him, showing an incredible amount of patience when compared to many of the other girls with whom she lives.

Lala's body seems to have a personality separate from her, and ironically seems to be a lot more emotional and expressive than the stoic Lala herself. It was very distressed upon losing her head and was happy upon being offered cookies by Papi. The body also seems to be a lot more honest about her feelings towards Kimihito; when Kimihito crashed into her, the body became aroused and happily embraced him while the head looked on in embarrassment.

She shows a deeper side of herself when she discovered that a young girl, Yuuhi Hajime, who was terminally ill and was dying, leaving her emotionally devastated. She would seek advice from Kimihito and would go as far as to take out one of Zombina's teeth and using it to turn her into a zombie which saved Yuhi's life, despite the fact it was a great taboo for Dullahan. Seeing her with her friends later on made her happy. She also showed a love for the happiness Kimihito and the other girls showed at home, and that is why she wanted to help Yuuhi.

Due to her Chuunibyou act, she has a tendency to refer to others as "Mortal". She is shown to take her job as a Dullahan quite seriously. When she encountered Wladislaus, she immediately reaped his soul and sent him back to the afterlife. 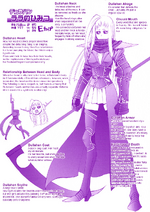 After revealing herself to Kimihito and the others following a search for her lost head, Lala reveals that her species serves as a form of Grim Reaper for people, arriving as a prelude to death, and is in fact perhaps serious that Kimihito's eventual marriage to any of his guests may result in his subsequent death. Chaos ensues as each of Kimihito's charges attempts to protect him from Lala, only to nearly kill him by accident each time. When Lala finally arrives to claim Kimihito's life, with Rachnera in tow, Lala locks up, not making a move despite having ample opportunity to.

Kimihito calls her on her bluff, raising several "death flags" in order to prove that Lala isn't actually what she says she is. When the group returns to the house, Ms. Smith reveals that dullahans always exaggerate and use poetic, flowery language to trick people into believing their words, and threatens Lala into revealing why she followed Kimihito around: she was interested in his seeming ability to constantly avoid death. Ms. Smith also explains that Lala has constantly escaped from her host families, and places her with Kimihito after Lala requests it, becoming the seventh member (and sixth official charge) of Kimihito's extraspecies family.

Lala is next seen taste-testing Miia's latest meal, which results in smoke pouring out of her headless body as her soul appears to ascend from her head. She then joins the rest of the girls in enjoying dinner that night, after Kimihito, Cerea, Mero, Papi, and Suu head out to get more food.

After chapter 25, Lala appears sparingly, seeming to only appear when Kimihito has a near-death experience. This is shown in chapter 30, where Kimihito's resolve to accept each girls' feelings combined with the other girls' attempts to woo him result in a series of near-death experiences. Each time, Kimihito awakens in a field of flowers next to a river; the last of which reveals that Lala is also present, and Kimihito is continually entering some state of the afterlife, confirming that Lala does, indeed, have supernatural powers. She indicates that she does not intend to pursue him during his lifespan; however, she notes that upon his actual death, his soul will belong to her and she will shepherd him into the afterlife.

Lala has a brief cameo in chapter 31, appearing for a single panel after Kimihito has a near-death experience at the onsen, when Yukio accidentally almost freezes him to death.

Her next major appearance is chapter 34, where she is revealed to have been tailing Kimihito, Mero, and Suu, while they were in the middle of a protection detail courtesy of Kinu and Liz. Kinu and Liz at first believe that Lala is the person they were supposed to protect Suu from; upon confronting her, Lala attempts to escape, to which Kinu responds by chucking Suu at her, tangling the two of them in a nearby bush and causing a scene. Later, Lala notes that she was following them, but did not join them because they were making too much noise. She's last seen when Mero is revealed to be a princess.

Her most recent major appearance is chapter 38, in which after the incident involving Mero's mother, Kimihito is in the Hospital recovering. While he's recovering, Lala pays him a surprise visit on behalf of the other girls, since the size of the hospital care rooms wouldn't be able to fit them. Though she was talking through her usually Chuuni speech (which was nicely translated through other speech bubbles), we start to see that Lala really does care about Kimihito. As Lala was talking with Kimihito, some of the hospital children came to play as Kimihito had promised to play with them earlier. Not knowing how to interact with kids, Lala is a bit unsure when she notices a small girl looking at her from the door. Before she can inquire further, Lala once again accidentally gets her head knocked off, scaring the other patients and the kids.

In the chaos, Lala's body and head are separated and her body ends up in the hospital gardens looking for her head when she runs into the girl from before, Yuhi, who inquires if Lala is an actual God of Death. Lala does her usual Chuuni act which thoroughly impresses the girl. Yuhi further questions Lala about her which eventually leads Yuhi to ask about the afterlife. Lala tries to comfort Yuhi as best as she could. When Yuhi has to go back, she asks Lala one more question about her soul's existence after death. Later on, Lala visits Kimihito again to find out what Yuhi might like in the way of gifts. When Kimihito asks why didn't she ask the nurse, we find out that she has a bit of social anxiety. At that point, Lala finds out that Yuhi has an unnamed terminal illness. When asking Kimihito for advice, she gets so shy in her Chuuni act that she ends up knocking him out and asking him in the afterlife.

Here is where we see another side of Lala we hadn't seen before where she actually does have concerns about the short life that Yuhi might have, not being able to have a childhood at all because of her terminal illness. Kimihito reassures her that she's already changed Yuhi's fate just by being a friend to her. But later on, Lala takes fate into her own hands and, with the help of the tooth she stole from Zombina, "cures" Yuhi of her illness by making her undead.

In chapter 39, Lala and Kimihito apologise to MON for their house arrest, though comically she wasn't able to do so properly do to her head falling off. Mon however weren't angry at all and were actually thankful to finally have a break from work. They also inform them that Yuhi's parents were very happy that their daughter was all better.

In chapter 45 and 46, Lala along with the others (with the exception of Cerea) had been experiencing hallucinations from Kino's spores. After having the house flooded with water and cleaned out, she and the others were returned to normal.

She appeared at the end of chapter 51 when she confronted Curie's father whom was possessing his daughter. Her presence terrified him, and she quickly reaped his soul easily without hesitation, sending him back to the afterlife. She quickly disappeared before anyone could spot her.

In her recent major appearance in chapter 52, Lala and Kimihito noticed Suu acting strangely, which lead to them going on a wild goose chase throughout the city trying to find Suu. After a long search they find Suu but are prevented from getting to her after a group of strange unknown men in a van capture her first. After they speed off leaving the two of them helpless, Lala's headless body taps Kimihito on the shoulder and gives him a thumbs up, which revealed that her head was gone. It's later revealed that Lala threw her head in the back of the van so her body could track it. In Chapter 54 her body reclaimes her head.

While it's unknown where she was during the Farm Arc, (she wasn't shown with the other girls), she is a part of the Lamia arc where the group visits Mia's home... sort of. During the boarding, a flight attendant tells Lala that carry-on bags with electronics or battery powered devices are not allowed, so she takes a moment to adjust her baggage. Unforunately her head falls off and ends up in the suitcase. The next scene shows Lala's body on the flight without her head. It's shown at the end of chapter 60 that Lala's head is first freaking out over actually ending up in Italy, but in the next scene, she is drinking coffee and a pair of croissant's. Chapter 61 shows her head somehow touring Italy (The Coosseum, Plaza di Spagna, and the Pantheon) with a disposable camera, which runs out of pictures just as the chapter ends.

The Dullahan (デュラハン, Dyurahan) is a humanoid liminal race most commonly known for their removable head.

Retrieved from "https://dailylifewithamonstergirl.fandom.com/wiki/Lala?oldid=59198"
Community content is available under CC-BY-SA unless otherwise noted.