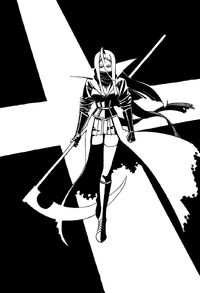 This page deals with Lala's interactions with the other characters.

Her relationship with Kimihito is more complicated than the other girls. Whereas many of them are trying to win his hand in marriage, Lala seems to have no interest in the matter. However, she does tell Kimihito when he dies, his soul will belong to her due to her duties as a dullahan; though this could mean that she is willing to wait until the end of his natural life, no matter the length, to be with him, showing an incredible amount of patience when compared to many of the other girls with whom she lives. Or it could mean that she is just interested in him sexually.

Though her body seems to be a lot more honest about her feelings towards Kimihito; when Kimihito crashed into her, the body became aroused and happily embraced him while the head looked on in embarrassment.

They get along very well and share a special bond. Whenever she is distressed, she seeks him out for advice or comfort, and is lot more honest and open about her emotions. When she was worried about Yuhi she came to him for help with her "Social Anxiety". Even going so far as to give him a near death experience just to ensure that they would have a private conversation with each other.

She seems to be a little more klutzy around him; Once appearing in his room while changing her clothes and later appearing naked in his shower. It's unknown why she chose those specific locations.

She acts very rebellious towards her and often hides behind Kimihito whenever she appears.

A close and personal young friend. They get along very well and she treats her like a little sister or even a daughter. She enjoys showing off her Chunni act to entertain her. She was very distressed when she found out she was terminally ill and was fated to die, so she broke her rules by using one of Zombina's teeth to turn her into a zombie, saving her life.

She was very happy to see her making new friends.

She doesn't interact with them due to her Social Anxiety and inability to communicate with kids, however she was happy to see them getting along with Yuhi.

They seem to be on good terms, though Miia does still find her head coming off and her dullahan abilities to be creepy. She was once seen playing a game with her competitively and has stated that she does consider her a friend.

They seem to get along quite well, treating her like a little sister. She seems to enjoying playing games with her and Suu.

They seem to be on good terms, and she has stated that she considers her, along with everyone else, to be a friend.

Just like with Papi she treats her like a little sister, and seems to enjoy playing video game with her. Though she does hate her attacks.

Though they are not seen interacting with each other often, they seem to get along quite well. Like everyone else she does consider her a friend.

Even thought aren't seen interacting often, they seem to be on good terms. She was concerned when she was about to be taken away by Ren and has stated that she considers her a friend. She does hate being tied up by her.

Lala saved Papi and Curie by using her real powers of a Grim Reaper by reaping the soul of Wladislaus' spirit, who was currently possessing his daughter and trying to make her into what he thought a vampire should be.

Retrieved from "https://dailylifewithamonstergirl.fandom.com/wiki/Lala/Relationship?oldid=60013"
Community content is available under CC-BY-SA unless otherwise noted.