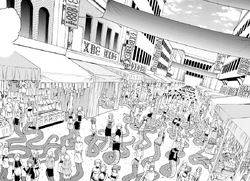 The Lamia Village is the unnamed hometown of Miia and her mother.

Populated predominantly by Lamia, the village has formed a partnership with the human world under the Cultural Exchange Between Species Bill. However, since the commencement of the bill less men have been arriving in the country due to the increase of travel security by the enforcers of the bill and as a result the village's birth rate has declined.

In an attempt to compensate for this, Lamia villages have taken to sending "representatives" via the exchange program for the purpose of acquiring a communal husband for the village.

Retrieved from "https://dailylifewithamonstergirl.fandom.com/wiki/Lamia_Village?oldid=55913"
Community content is available under CC-BY-SA unless otherwise noted.