Lato is a Dragonewt that appears in Monster Musume: Everyday Life with Monster Girls Online. 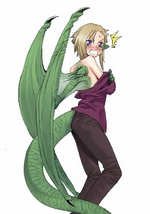 Dragonewts (ドラゴニュート, Doragonyūto), also known as Dragon-kin (ドラゴンメイド, Doragon-meido), are a reptilian demi-human race said to be descended from dragons. Possessing scales and draconian wings, a dragonewt's scales are stronger than steel and as such they can block all cutting weapons and even deflect bullets. Like dragons, they have a scale that was reverse grown, touching them will make them weak.

Retrieved from "https://dailylifewithamonstergirl.fandom.com/wiki/Lato?oldid=59565"
Community content is available under CC-BY-SA unless otherwise noted.