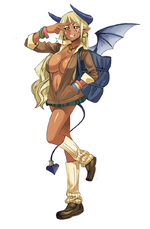 Greater Devils (グレーターデビル, Gurētā Debiru) are devils that have the bodies of humans in their late teens. Despite the name, Greater Devils are not matured Lesser Devils, but rather their own Devil class. They enjoy dressing in human fashion and venturing into the city at night to play rather malicious pranks.

However, because their actual age is much greater than their apparent age, much like Lesser Devils, they can be out of touch with fashion trends popular among younger people.

Retrieved from "https://dailylifewithamonstergirl.fandom.com/wiki/Lethe?oldid=60117"
Community content is available under CC-BY-SA unless otherwise noted.