"Kihihi! No human or Extra-species person can avoid it. The devil Lilith-chan will make everyone her toy."- Lilith's "plan".

Lilith is a Lesser Devil who appeared in chapter 21 attempting to cause mischief upon Centorea Shianus during her and Rachnera's turn with Kimihito. However despite her success at the start, a surprise attack by a wild boar caused her hypnotism to fail and she was subsequently captured and "enslaved" by Rachnera Arachnera. [3] She was later released and is performing community service under Polt's supervision as punishment. [4]

Lilith appears as a young prepubescent girl with dark mocha skin and blue hair. Her iris color is green with black sclera. Her teeth are noticeably pointed like Rachnera's.

As a devil, Lilith also has Bat-like wings and two black curved horns that face forward along with a stereotypical spadetail.

Her attire consists of a black and white hooded jacket with a grinning devil on her left breasts, hot pants, thigh high socks and sneakers. Her jacket has zippers on the back to allow her wings to be extended

As is natural for Lesser Devils, Lilith has a sadistic mischievous personality that wants to make everyone, humans and extra-species alike, be her toys to entertain herself with. For undisclosed reasons, she chose Cerea as her first target after removing Manako by leading her into a depressed state through acting at being afraid of her cyclopean features. After being interrogated by Rachnera, she became a submissive masochist subservient to said Arachne.[3]

Despite being an adult, Lilith has no problem using her appearance to pretend to be an innocent young girl to manipulate people. Such as pretending to be terrified of Manako's eye to make her depressed and getting cheaper fares on the train and cheaper movie tickets. This didn't work on Polt, however, whose sense of smell easily allowed her to see past the deception. [4]

She also seems to be a very insightful person, as she was quickly capable of fully deducing Rachnera's history and motives after just meeting her.[3]

Although Lilith usually uses her hypnosis to manipulate others, she is also willing to use physical violence as seen in Chapter 40 when she tries to molest Kimihito to use the evidence to make him look bad in front of Rachnera.

During Kimihito's date with Centorea, Lilith sees Manako keeping surveillance on them. Lilith walks up to the Monoeye and pretends to be a curious child. However, upon seeing Manako's single eye Lilith runs away screaming, proclaiming Manako to be a monster and causing the latter to lose focus on her mission. Hiding from the distraught Manako, Lilith reveals her true nature and declares that she did that on purpose, so that she could "play" with Centorea later.

Lilith later encounters Centorea as the Centaur is wandering the park alone, distraught at not being useful to her master. Lilith then pretends to be a little girl again, causing an emotional Centorea to open up to her. Just as Centorea finishes talking, Lilith suddenly hypnotises her to do "something only she can do" to Kimihto, to do "something boys like". This causes Centorea to walk up to Kimihito and force herself upon him, as a misguided attempt to repay him, much to the latter's confusion and shock. During this, Lilith watches and giggles at the mischief she has created, only to suddenly be attacked by a Wild Boar that roams the park. Due to this, her influence over Centorea wears off, causing the confused Centaur to back down.

Kimihito distracts the boar as Lilith flees, only for her to be captured by Rachnera shortly afterwards. As Kimihito and Centorea leave, Rachnera ponders on what she can do with Lilith, proclaiming that the devil seems to be scared. Lilith responds to this comment, explaining that Rachnera is only pretending to be in the shadows and pulling the strings, but in reality she scared of what people will think of her. In response to this, Rachnera bursts into a rage, proclaiming that she now knows that Lilith is an adult in a child's body, and that she can take a real punishment.

For leaving her houshold by herself, Lilith is apprehended and placed under Polt's custody. The Kobold forces both Lilith and Draco to run an entire marathon as a pentalty. Though Lilith tries to get out of it by claiming once again she's just a child, Polt easily sees through the deception with her sense of smell and forces the two to run regardless. The Devil and Dragonewt never caught out on their own again.[4]

She later reappears in alongside Draco, searching for Rachnera after being released from her "enslavement". In the confusion, Lilith, Draco, Liz and Kinu started fighting, only to be apprehended by Smith later.[6] 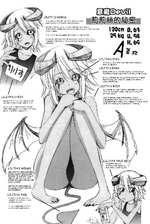 Lesser Devils (レッサーデビル, Ressā Debiru) are devils that have the bodies of humans in their childhood. Lesser Devils have small wings and bodies that are comparable with children, even though Lesser Devils can be fully grown in actuality. Lesser Devils usually use their petite bodies to get away with affording things at children admissions rates.

Retrieved from "https://dailylifewithamonstergirl.fandom.com/wiki/Lilith?oldid=63061"
Community content is available under CC-BY-SA unless otherwise noted.