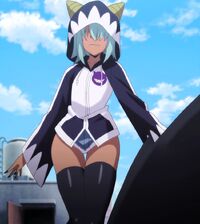 This page deals with Lilith's interactions with the other characters.

Lilith attempted to make him her plaything (along with Centorea) but failed. She appears jealous of Kimihito's bond with Rachnera.

She attempted to make Centorea her plaything but failed. Centorea is grateful to Lilith under a misunderstanding and impression she was a mysterious girl giving her advice.

After Lilith taunts Rachnera on how others would see the Arachne, Rachnera punishes her. This resulted in Lilith having a master-slave relationship with Rachnera where Lilith is now infatuated with her and calls her "Mistress".

In an attempt to make Centorea and Kimihito her playthings, Lilith manipulated/distracted Manako by pretending to be a child that was afraid of her one eye.

After being caught for her actions, she's now performing community service under Polt's supervision. She finds the Kobold's energetic personality overwhelming.

The two worked together doing community service under Polt.

When Lilith first met the two, she became at odds with them as she was only interested in wondering if Rachnera abandoned her.

Retrieved from "https://dailylifewithamonstergirl.fandom.com/wiki/Lilith/Relationship?oldid=58361"
Community content is available under CC-BY-SA unless otherwise noted.