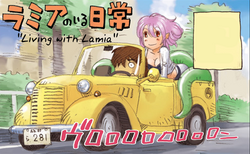 Numbering at eleven "chapters" (and a twelfth bonus "interview" with the author), each comic chapter involves a short story revolving around one of eight brothers as they experience life with their “monster girl” girlfriend.
Following the release of the Monster Musume: Everyday Life with Monster Girls anime series, a new series of "Living with" comics were created; focusing on a female cast member from the show. These comics were not as sexually orientated as the previous series and were originally released with anime Blu-ray volumes.

Retrieved from "https://dailylifewithamonstergirl.fandom.com/wiki/Living_with_Monster_Girl?oldid=39733"
Community content is available under CC-BY-SA unless otherwise noted.